Take a deep dive into the Arcana powerups 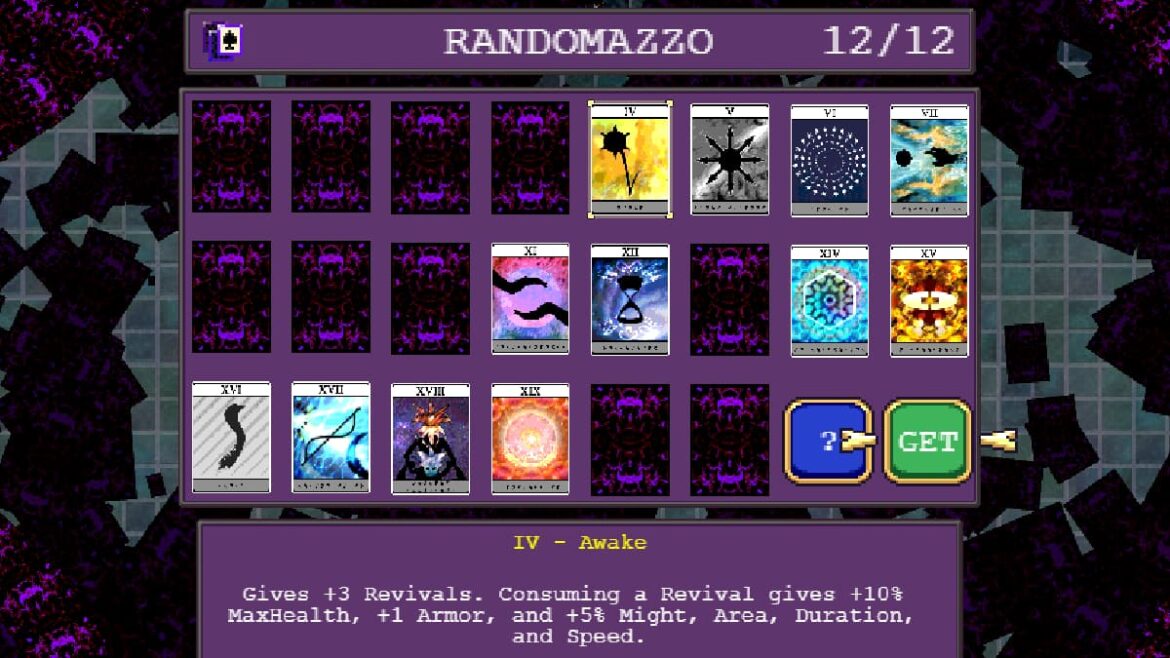 Arcana is a mighty powerup that you can choose at the beginning and during your Vampire Survivors run to aid you in your adventure. Here are all Arcana Powerups in Vampire Survivors, explained.

How to Unlock the Arcanas in Vampire Survivors

Arcanas can only be obtained after you unlock the Randomazzo in the Gallo Tower stage. After this is done and you unlock your first Arcana VI – Sarabande of Healing, you can unlock all the other ones (mostly in any order that you like). You can only have three at one time.
We’ll look at all current Arcanas below and provide some insight into each of them.

Currently, there are 12 Arcanas, but the Arcana Menu has predicted 22 slots for them. The developer is adding new Arcanas with almost every update, so we expect this to be filled up by the end of 2022. As mentioned above, you can have up to three Arcanas during a game. You choose the first one at the start, the second from a chest after 11:00, and the third from a chest, but after 21:00. Usually, they are dropped by a glowing bat. For the second and third roll, you will have a choice between up to four Arcanas (depending on how much you have unlocked) and if you have a Reroll, you will be able to choose from different four. They are all marked with Roman Numerals.

Which Arcana is the Best in Vampire Survivors?

Let’s first have a look at them in detail. Where available, we’ll link to an unlock guide that we have on our site.

Data miners have discovered that there are placeholder files for more Arcanas and we’ll update this list as soon as they are released. DISCLAIMER: The developer reserves the right to change these names before the final release or to not release them at all:

What Arcanas Should I Use? Is There an Arcana Tier List?

Generally speaking, there’s no right or wrong choice here. Except maybe if you pick Arcanas for weapons that you do not have at all (bless the reroll!). However, two of these currently stand out to us as generic problem-solvers for most of the runs. For the third one, you can choose the Arcana that’s the closest in compatibility to your current arsenal.

Giving +3 Revivals is enough. It doesn’t need to do anything else and it would still be too good. It saves you a slot that you would need to commit to Tiragisu otherwise. But having Tiragisu on top of it, plus Revival purchased before the game, secures you a long run. We always pick it as the first Arcana.

There’s absolutely no mistake if you choose this Arcana, ever. Picking up a random Floor Chicken to get healed while you’re being chased? Great! That heal also deals damage to the enemies that are close to you and gets them off of your tail.

Secret Way to Unlock an Arcana in Vampire Survivors

Try typing “randomazzami” on your keyboard while in the main menu. This should unlock the Randomazzo for new players.

Now that you know all about Arcana Powerups, check out our other Vampire Survivors articles by clicking on the game tag below.