How to Unlock Divano Thelma and Crimson Shroud in Vampire Survivors 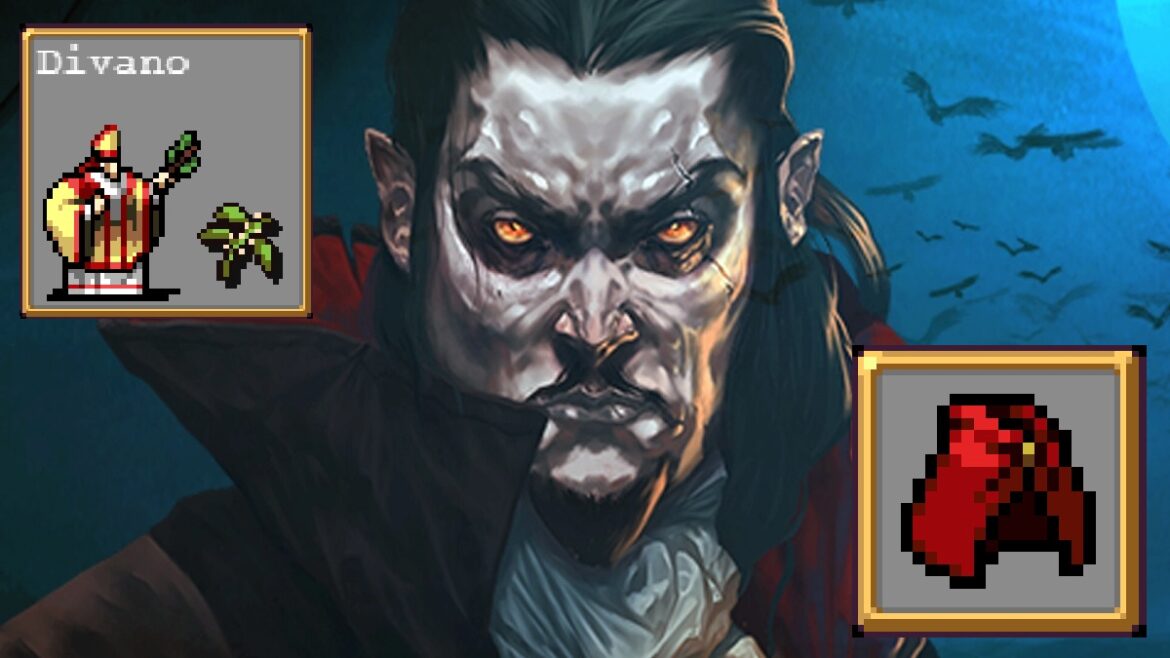 Patch 0.6.1 is one of the most game-changing patches so far in Vampire Survivors, providing a lot of interesting new content, six achievements, three new characters, and two new weapon upgrades – something that the players wanted for a while. We will show you how to quickly and efficiently unlock one of those new weapons and characters – Crimson Shroud and Divano Themla – within the same run in Vampire Survivors.

Crimson Shroud is one of the most powerful weapons in Vampire Survivors, and to some extent, it’s hard to get.

After you successfully obtain The Yellow Sign, you will see new items on the minimap. For Crimson Shroud, we are looking for Metaglio Left, and Metaglio Right. They usually appear left and right from your starting location (unless you are at Gallo Tower, or any other vertical map, in which case they spawn up and down).

The first part of this contraption is the Laurel. It is available when you start playing Vampire Survivors, you just need to roll it when leveling up. We suggest you grab the Metaglio Left first, due to the fact that it has a good effect (Increases Recovery by 0.1 and multiplies Max Health by 1.05 per level, and the maximum level of the item is 9), and then snatch the Metaglio Right. The reasoning behind this is that Metaglio Right is Cursed and increases enemy speed, health, quantity, and frequency by 5% (also has a maximum of 9 levels which can cause quite an inconvenience for you).

Each of the Metaglios has a new type of enemy who will chase you until either of you dies. They don’t have a name yet, but they’re still pretty terrifying. They hit really hard and can kill you in a matter of three or four swings, and they have enough HP to sustain a prolonged beating – it took us 10-15 minutes to beat them. They move very quickly, so be very cautious when navigating the map. When they die, they leave a Golden Egg behind them.

Laurel, Metaglio Left, and Metaglio Right ALL need to be maxed out, and then you can grab a chest from the ground so that you can try to roll an upgrade into Crimson Shroud.

Crimson Shroud makes a shield around you that protects you from incoming damage and can also make you invulnerable for a short period of time. The color of the shield changes based on the number of charges. It starts with Yellow, becomes Orange, then Red at the end. It can cause return damage when invulnerability is activated, and the explosion that it makes produces a shockwave and a circle. To top it all, it caps all incoming damage at 10. This means that Red Death cannot kill you that easily.

After you unlock the Crimson Shroud, you will also automatically unlock Divano Thelmo as a character that you can buy from the menu. Divano starts with one extra level. They have +1.0 Recovery, +30% Luck, -50% Greed, and +6 Banish. Divano’s starter weapon is Laurel.

Now check out our other Vampire Survivors patch 0.6.1 guides by clicking the links below: