How to Defeat the Skrendel Bros in High On Life

Is Bro-Tron a cyclops or a triclops? 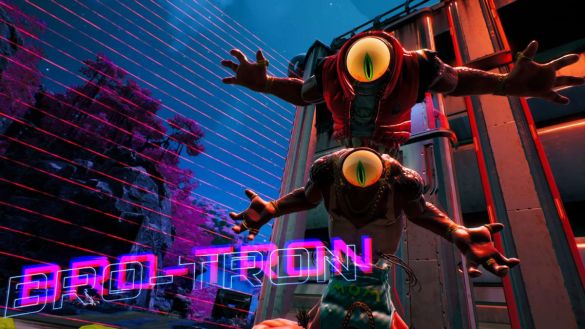 High On Life is an irreverent sci-fi shooter that sets you and your arsenal of wise-cracking guns against an intergalactic drug cartel that has been sucking the life out of civilization for years. And you, for whatever reason, are the only thing stopping Earth from suffering the same fate.

One of the more unique bosses you’ll fight in your journey to promote Drug Abuse Resistance Education (D.A.R.E. for short), is the Skrendel Bros who now control Zephyr Paradise. Head to the Deep Jungle and, using your assortment of new guns, with all their environmental abilities, make your way to Skrendel Labs. Once you’ve made it far enough, you’ll encounter your first Skrendel brother.

The Skrendel Bros fight is divided into four parts. You’ll fight Jonathan, Angela, and Mona, in that order, before they come together to fight as Bro-Tron. Here’s how to wipe the floor with these brothers and get that bounty in High on Life.

How to Defeat the Skrendel Bros in High On Life

When you first encounter Jonathan, you will have just gotten Creature, one of my favorite guns in High On Life. Check out our High On Life Best Guns Ranked List to see who took the top spot.

Creature will be extremely useful in this fight, and the fights following. The other gun who should see a lot of action is Sweezy. Not because of her primary fire but because of her Gunk Shot, which slows time.

Before you fight Jonathan, it’s important to note that Jonathan is only a segment of a whole and thus only has a fraction of the final boss’s health. Jonathan’s signature move is jumping on the ground and creating toxic sludge waves that radiate outward from his landing point like rings.

You’ll notice that there are hook bugs and platforms around this arena. You can opt to use them, but this leads to Jacob using an aerial ring attack which is a little more difficult to dodge than the floor attack because it moves faster and is harder to jump through.

Thus, for this fight, it’s easier to only use the hook bugs to dodge an overlapping ground sludge attack that you’re not certain you can escape with normal jumping.

As for actually doing damage, the best approach to Jonathan is to freeze him with Sweezy when he’s using one of his animations, like pounding his chest, then launch as many of Creature’s children at him as possible. Creature is so strong in this fight because his bullets, which instantly lock onto an enemy, counter one of the Skrendel brothers’ greatest strengths: how fast they are.

Do a few rounds of ring jumping and Jonathan will scuttle away. Coward. But don’t worry, we’ll see him again soon.

You’ll progress through the labs until you encounter Angela. Angela’s fight is much more difficult. You’ll now have to fight some pretty beefy grunts in a room that is filled with saw blades that will damage you if you fall into them.

Angela’s primary move is that he spits gobs of sludge. Sort of like a shotgun. There are about five “pellets” and a fairly widespread that can go a long distance. If you could dodge comfortably in this room, it’d be a great move to use. But with the saw blades and grunts in the room, your best bet is to run or jump instead.

Similar to Jonathan, you’re going to want to corner Angela when he’s on the ground, as he has a tendency to jump around. Freeze him with Sweezy, and then unload Creature and the rest of the guns into him as quickly as possible. The grunts in this level will probably do more damage to you than Angela, so dodging around them or killing them will also be a priority, especially since they’ll try to corner you and pummel you to death.

You’ll finally have a chance to meet the last Skrendel, Mona. Mona has a much more interesting move set. He’ll lunge at you quickly, which is fairly easy to dodge if you keep distance. But his power move is when he begins to spin at you. He’ll move quickly during this phase and begin to shoot out three large sludge balls.

These large sludge balls will do damage on impact, but when they land on the floor, they will create a permanent place of damage should you step into them. Stepping on a sludge puddle does very little damage, but the longer the fight goes on, the more sludge puddles there will be. So, it’s to your advantage to use Creature to activate the hook bug nests around the arena.

Your primary method for defeating Mona is to use the exact same strategy that you used in the last two Skrendel brothers’ fights. When he’s in his top form and charging towards you, use his linear pathing to your advantage to freeze him with Sweezy’s Gunk Shot.

Once he’s frozen, he’ll be easier to dodge, but it will also be easier to fill the arena with Creature’s bullet children. This will allow you to shoot and forget as you dodge Mona’s attacks or use the hook bugs to avoid the environmental hazards.

Get him to half health and Mona will go absolutely berserk, moving at a much faster rate than before, while constantly shooting out sludge balls. Do your very best to stay alive, dodging his attacks and spamming Creature and, where possible, Sweezy’s time freeze. Eventually, you should whittle him down to zero health, initiating the final fight.

I hope you’ve been paying attention to the brothers’ kits! Because this fight is going to be a doozy.

Immediately after their title screen introduction, use Sweezy’s Gunk Shot to freeze them to get a few pot shots in. It won’t last long, and they’ll immediately use a sludge fountain. This creates a dozen or so sludge columns that will start at their position and then push outward, enricling the arena. It won’t last long, but if you’re hit by one of these columns, it will peel away a chunk of your shield.

Immediately after this column move, they’ll stand still (great time to shoot them), though not for too long. They’ll soon fall to the floor and roll at you at incredibly fast speeds. You can technically jump over them, but it will be easier to use the hook bugs to avoid this large physical attack.

The Skrendel brothers will then separate, with each of them doing their signature attacks. Jonathan will create sludge rings, Angela will shoot shotgun sludge balls, and Mona will shoot up giant sludge balls that will become environmental hazards.

Lay into the Skrendel brother you hate the most, absolutely unloading all of your bullets until he’s dead. Pursue if necessary. Destroying one Skrendel brother will give you one less sludge attack to worry about, and it will make handling the other two easier.

Once one is dead, repeat the same strategy with the second one. When you finally reach the third, the fight will be significantly easier. Just spam Creature and wait for the last Skrendel to die, while keeping an eye out for sludge puddles on the floor. It’d be awful to die now to the gradual tick of poison damage.

If you find yourself struggling, one of the best things you can do is use the hook bugs to catch a breather and to take stock of your surroundings. Use your time in the air (but don’t linger here, you can definitely be damaged while swinging around with Knifey) to determine which Skrendel brother is which, and who you want to focus on.

While you’re up in the air you may also notice that there are 4 shields on the ground. Use them whenever you need to. And don’t worry if this fight takes you more than one try. It’s extremely difficult with many different elements to get through.

But once you finally defeat all three, you’ll have the gruesome job of cutting out a piece of all three of them. At least Knifey is happy? There’s one of the hardest bounties you’ll have to take down, and you’ll get the achievement “Who’s The Boss?”, worth 45 gamerscore, to prove you’ve conquered it. Congrats, Bounty Hunter.