How to Beat the Strider Guardian in Sonic Frontiers

How to jump on things 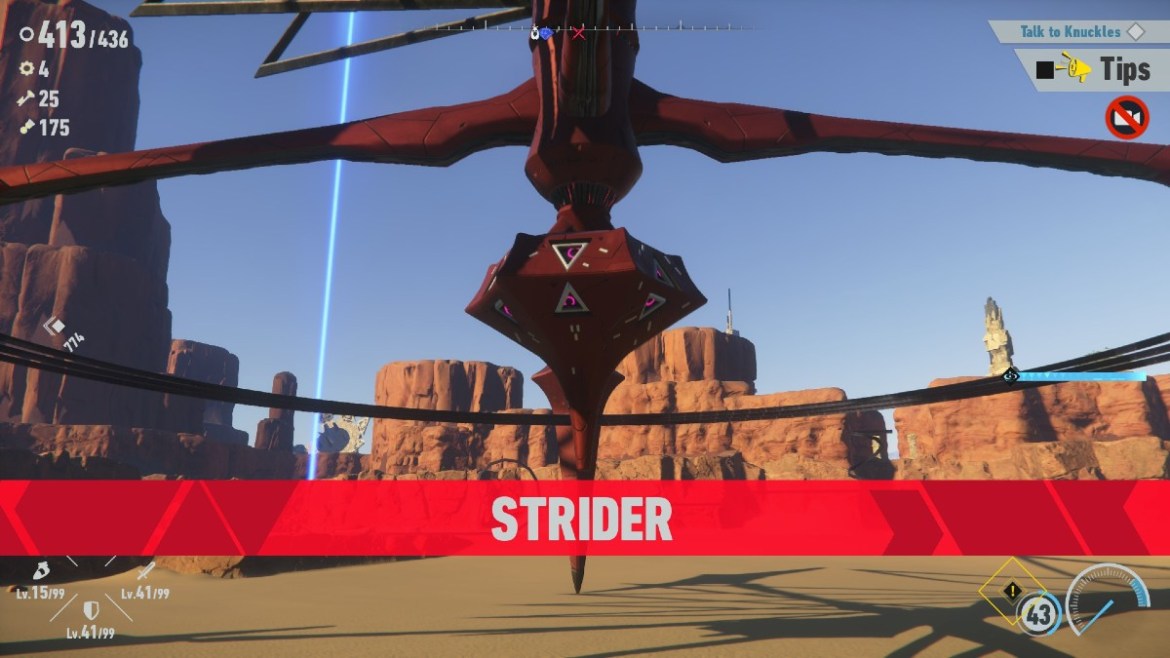 When you get to Ares Island, a vast desert you end up in following the first island, you’ll probably see this thing within seconds. Much like the Asura Guardian in Kronos Island, Strider Guardian is friggin’ huge. And it looks even less like an actual moving entity since it’s stationary and doesn’t really have any limb-like pieces. Beating this thing is weird and frankly, kind of poorly designed in some ways. I’m here to help though as I beat this boss pretty easily anyway.

How to Beat the Strider Guardian in Sonic Frontiers

As you approach, Strider Guardian will fire out a bunch of spinning circles covered in… Guardian Damage Juice? They look pretty scary and will definitely hurt if you touch them. But they don’t travel far and float pretty high so you can easily avoid them. The juice/fire will cool down, revealing the circles are actually rails. If you hop on one, you’ll notice the parts you grind on turn blue, a big ol’ hint for the rest of this battle.

When you complete a circle, the rail circle will turn white and pop you up to the closest other one. Don’t touch the stick here as Sonic will land on the next one by himself. Do the same thing and you’ll be shot over to the inner area of Strider Guardian, which comprises the “core,” and three much larger rings running around it.

The strategy here follows the same goal: grind full circles on each rail ring to turn it white. This time, the rails are much larger, and there are hazards you have to avoid. The spiky gimmicks will chase you, so always be ready to hop to a different rail. Strider itself will do a flamethrower-like gimmick as well. Finally, Strider’s “legs” are deliberately included by the camera, obscuring your view when Sonic passes by them. Make sure you’re paying close attention in case you need to anticipate what to do when you can’t see.

Related: How to Quickly Max Stats in Sonic Frontiers

Once you activate all three rings, the core becomes vulnerable for a brief moment. If you’re strong enough at this point you can unload on this fool machine and blow its ass up in one combo. If not, just repeat the above after you get bucked off. EZPZ.