What do Jinn Shrines do in Genshin Impact 3.4? - Answered - Prima Games
Tips

What do Jinn Shrines do in Genshin Impact 3.4? – Answered

A Jinn also needs to eat 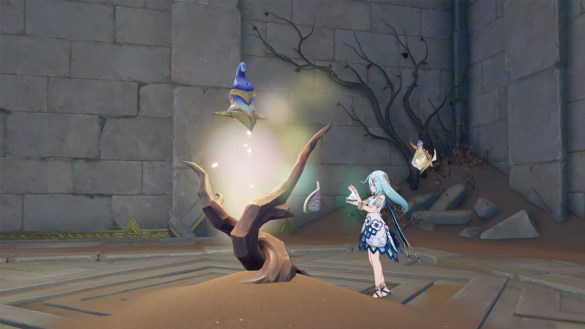 Every area introduced in Genshin Impact comes not only with lots of treasures to discover and puzzles to solve, but also with a new gadget that helps the Traveler in this mission. The Desert of Hadramaveth has the Jinni in the Bottle, which might not grant you three wishes, but will help you find ancient goods in the desert, which is almost just as good.

And as you can imagine, the bottle containing the Jinn Liloupar is related to the Jinn Shrines we can find scattered around the ruins and the endless sand across the horizon of this new area. They’re fundamental for a smooth exploration, and we’ll talk about how they work here.

What do Jinn Shrines do in Genshin Impact? – Answered

The Jinn Shrines can recharge the Jinn’s Might, which is spent whenever you use Liloupar to uncover the desert’s secrets such as the Atmosphere Vortexes. These concentrated gusts are used to occult puzzles and treasures around the desert and are only dispersed by using the Jinn’s power.

After reaching a certain point in the quest, the temples will also serve as a way of conjuring or ceasing sandstorms around the Deserts, which can help you get otherwise unreachable treasures.

Finally, the Jinni can reveal hidden walls near the Shrines after acquiring enough Fragments, so whenever you visit a Shrine, make sure you check every corner for secret paths, which can contain treasures or more lore dumps.

If you haven’t obtained the Jinni in the Bottle gadget yet, you can obtain it by advancing in The Dirge of Bilqis World Quests. The Jinn will be obtained during the second step “The Temple Where Sand Flows Like Tears” after reaching Liloupar’s Cell. This step is fairly long, so take your time.

Related: How to Open the Gate in The Dirge of Bilqis Quest: Genshin Impact 3.4

The Jinn uses the same slot as a Pet, so you can use it without removing any of your other gadgets such as the Compass. You also need to increase its power by finding its fragments, also obtained in the next few Dirge of Bilqis steps. Yeah, those quests are needed for doing basically everything in the desert.

Once you got enough Jinn fragments, you can use them to quell the storms and continue your smooth exploration. Atmosphere Vortexes are always near Jinn Shrines too, so don’t worry about running out of energy as it seldom happens.