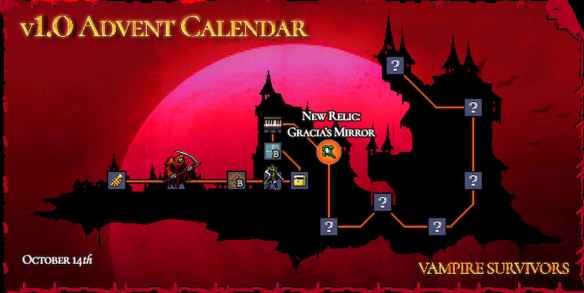 We have crossed the halfway point of the Advent Calendar spoilers for Vampire Survivors, with a lot of music being revealed, an entire soundtrack that you can buy on Steam, a couple of new skins, a huge in-game relic that will change the way we play from v1.0 onward, and more. Poncle is really going all-in on the hype build-up for the full release, and the gaming community is unanimous in their appreciation of the effort that the developer team has put into Early Access. The best part is, they promised that v1.0 won’t be the last update for Vampire Survivors and that there will be more stuff down the line.

Here is the list of all previous Advent Calendar Spoilers if you missed any:

Poncle has revealed that we are getting Gracia’s Mirror which is basically Among Us on April 1st. Stages will be upside down, and you will get a 200% increase in Gold and enemy health. This will indeed be a great challenge for the hardcore fans of the game. It was mentioned that the enemies will grow stronger over time, which allegedly makes the Bone Zone “an absolute nightmare” as stated by Poncle on Steam News. Merchants will also offer additional stuff, and the most important one would be another Arcana. They have also thought two steps ahead and made it so that you can disable the visual effect of the level, but keep the technicalities (some people can and will get motion sickness from this).

That’s it for this spoiler. Check Prima Games tomorrow for new reveal information, and stick with us on launch day for our coverage of new content, new achievements, and everything all Vampire Survivors players will need to unlock everything in the game (including 100% achievements).