The Advent has begun! 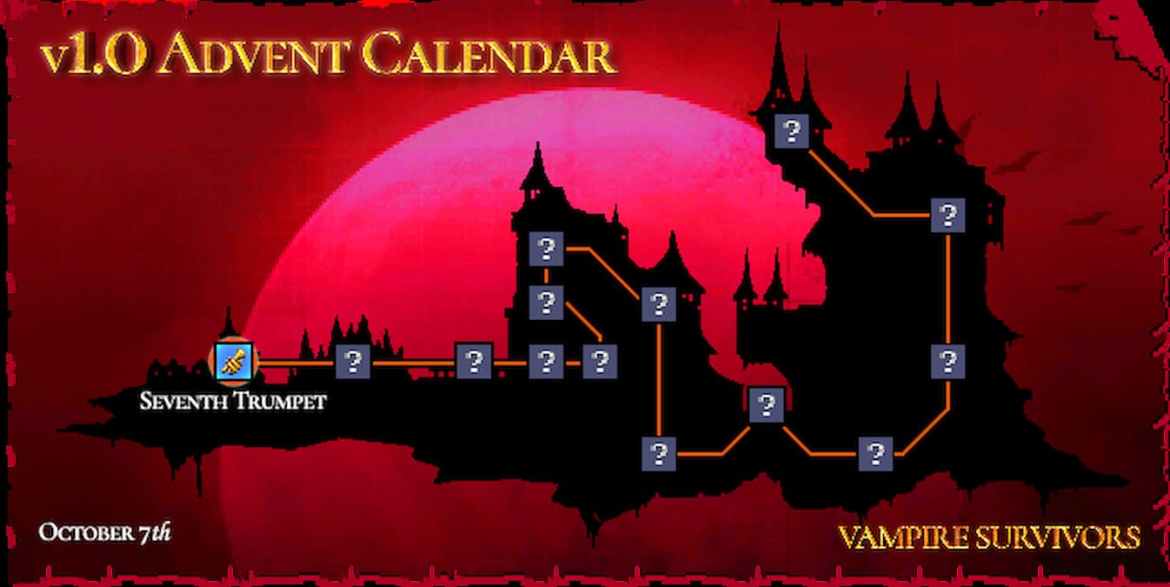 Vampire Survivor’s release is scheduled for October 20, 2022, and the Advent Calendar is counting down the days until launch. Prima Games will cover the entire Advent from start to finish, so make sure to check back every day. The hype around the final and full release of the game is consistently getting higher, with Vampire Survivors becoming the most-played game on Steam Deck! Here’s the first Advent Calendar spoiler.

Today, the Seventh Trumpet was announced, and with it, a new game mode that has been largely requested by Vampire Survivors fans for a while now. You will be able to disable the nasty Reaper (Red Death), who will no longer come for you when the 30 minutes are up. Who knows what the high scores are going to look like and how long the runs are going to last with this game mode? This is a content farm for YouTubers and Twitch streamers, without a doubt! We expect some graphics cards to be melted during these feats, at least until they switch the game to a new engine.

In addition to this, you should follow @poncle_vampire on Twitter and retweet the tweet below for a chance to win a Vampire Survivors Steam key if you don’t own the game already. Devs also created an official video on TikTok.

Related: I Played a Buttload of Steam Next Fest Vampire Survivors Clone Demos; These Ones Were Great

Stay tuned tomorrow for more coverage of the Vampire Survivors Advent Calendar. We cover VS extensively so if you need help before 1.0 comes out, click on the game tag below to browse through our guide archives so you’re ready to jump into the update on October 20.