And EVEN MORE MUSIC! 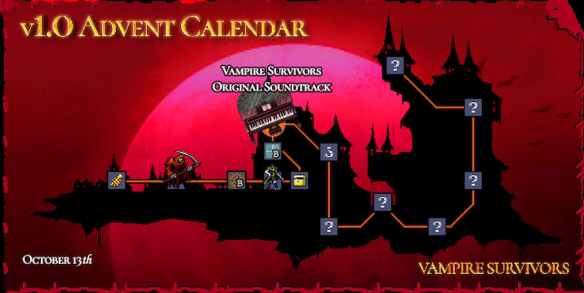 Today is October 13, but it’s not Friday for this to be a full horror experience when it comes to the Vampire Survivors Advent Calendar Spoiler 6 reveal. Players are thirsty for that Vampire Survivors v1.0 action and are eager to unlock all the new achievements and content that Poncle will throw their way. After all, it’s been a long while since we’ve had any major content updates. The team has spoiled us greatly with regular bi-weekly content updates and October 20 can’t come soon enough.

Let’s have a look at today’s spoiler for the Vampire Survivors Advent Calendar.

In case you have missed any of the spoilers from the past week, check out our previous roundups:

Today, Poncle revealed that the seventh VS Advent Calendar spoiler is that the game’s soundtrack is now officially available on Steam! 25 Music tracks are out, plus eight jingles (even the ones playing when you are opening a treasure chest!), all made by artists well-known to this community: Daniele Zandara, Filippo Vicarelli, and William Davies. This will also be a gift that keeps on giving because the dev team promises more new songs that will be added free of charge (three confirmed so far). Mad Forest B side should be available now, but it seems they put their YouTube video on private by mistake…

Update: They fixed the video!

For tomorrow, they have announced that something backward or upside down might happen. Let’s wait and see!

Do you like the spoilers so far as much as we do? We definitely want one that matches the hype of day 1 and we hope that we will be able to see more of that until the end of this Advent Calendar. In the meantime, keep unlocking the currently available content in the game so that you are ready for the v1.0 release. And if you end up in a pickle for any unlock, look up a guide here on Prima Games under the Vampire Survivors game tag below, or in the search box in the upper-right corner.