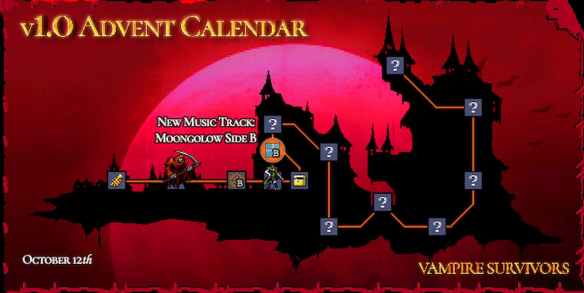 Just a little over a week remains until Vampire Survivors v1.0 releases on Steam, and today, we are covering the Advent Calendar Spoiler 6 for Wednesday, October 12th, 2022. The Poncle team has been very active on social media in the past week and we are always on the edge of our seats waiting for the latest news regarding spoilers.

Vampire Survivors is shaping up as a game that will most likely win indie game awards at the end of the year (it’s already the most-played game on Steam Deck right now!) and we say it’s 100% deserved.

In case you missed any of the previous Advent Calendar days, check out the list below to catch up:

Today, the Poncle team has revealed a new song for the Moongolow stage, made by the Midi Tamer, Filippo Vicarelli.

Poncle sort of admits that this spoiler might be underwhelming, but they promise more action in the days to come (I mean, we’ve just had a soundtrack spoiler a few days ago). We expect something as shocking as the first spoiler to drop really soon!

Tune into Prima Games tomorrow for another Vampire Survivors Advent Calender spoiler roundup. If you’re trying to unlock everything before the VS 1.0 update, click on the game tag below to browse through our archives because we’re covered pretty much everything from the early access. See you tomorrow!