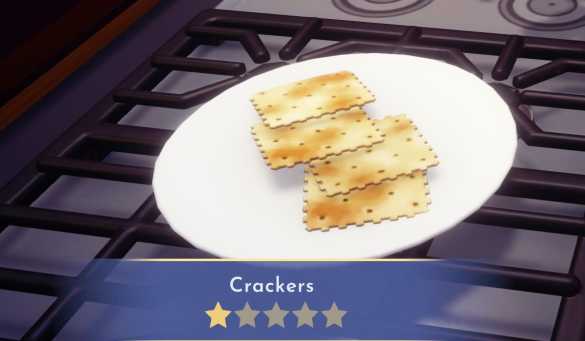 Shortly after you begin playing Disney Dreamlight Valley, you’ll encounter a quest named “Foodception”. In this quest, you’ll have to cook both crackers and fruit salad for Mickey. While fruit salad is an entirely different challenge at first, we’ll focus on the first recipe for today. If you’re interested in learning more, continue reading to discover how to make crackers in Disney Dreamlight Valley.

In Disney Dreamlight Valley, you only need one ingredient to cook crackers. More specifically, you need one type of ingredient. The game classifies these as any “Any Grains”, revealing that you can use any grain to make them.

This may spark some confusion, though. After all, when you go into the “Grains” tab in your Ingredients Collection, you’ll find six different kinds. When you toss Soya into the cooking pot, however, you’ll end up with a Shake instead of crackers. Want to know one ingredient that will work every time?

Wheat! That’s right, the early-game grain you can buy from Peaceful Meadow for as low as one coin per seed package. You’ll make some crackers by planting these seeds, waiting one minute, and throwing the wheat onto your stove.

Related: How to Get Wheat Seeds in Disney Dreamlight Valley

Want to hear a lesser-known fun fact for today? If you run out of wheat, you can also use rice. Unfortunately, they don’t officially turn into rice crackers, but at least you have an alternative! You also won’t find rice until you advance later in the game, making it less viable in the early game. At the very least, it is an option if you run out of wheat and don’t feel like going out to buy more.

Disney Dreamlight Valley is available to play on PC, Nintendo Switch, Xbox One, Xbox Series X/S, and PlayStation platforms through the official website. If you’re interested in learning more about the game, check out How to Make Beignets and How to Make Crudités. If you’d rather see the complete list of every cooking recipe in the game, be sure to check out our Disney Dreamlight Valley Cooking Guide.