How to Find the Chamber of Starlight in Destiny 2

The grind never stops in Destiny 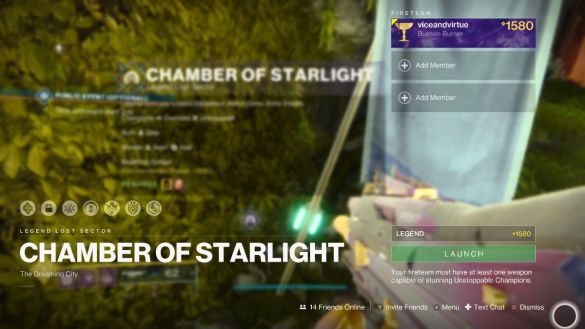 Destiny 2 is a shooter-looter set in space, which has kept its loyal player base in a chokehold for half a decade. Half of the appeal of Destiny is the stunning visuals, story, and multi-faceted characters. The other half is the brutal (occasionally soul crushing) grind for the most optimal loot possible. Optimal might speak to getting even bigger numbers or creating a cohesive, unstoppable build for either PvP or PVE.

Legend Lost Sectors are one way to nab the armor you might need for that build. And, currently, the Chamber of Starlight is that Legend Lost Sector, offering an Exotic Helmet (and I guess an enhancement core) to those who can defeat it. But how do you get there?

How to Find the Chamber of Starlight in Destiny 2

Important to note is that you must have the Forsaken DLC or Chamber of Starlight must be a Legendary Lost Sector for you to even access it.

To find the Chamber of Starlight, head to the Dreaming City and select the only fast travel point available, Divalian Mists. From here, we’ll be headed towards Rheasilvia. You might be tempted to go through the grand doors, past the Taken, down a long marble corridor to get there.

Don’t. If you hit The Blind Well, you’ve gone the wrong way. The actual path to Rheasilvia is to take the narrow road to the far left, beside the cliff. You’ll go through a claustrophobia cave passage, then emerge into Rheasilvia. You’ll see a bridge ahead of you but ignore it and keep right. You’ll see a ravine and a narrow ledge you can jump to.

Dismount your Sparrow and jump down to the ledge. Here is the Chamber of Starlight. Enter, and you’ll be bombarded by Taken Hobgoblins, Acolytes, Thralls, Acolyte’s Eye, and Ravenous Taken Knight. But it’s nothing you can’t handle.