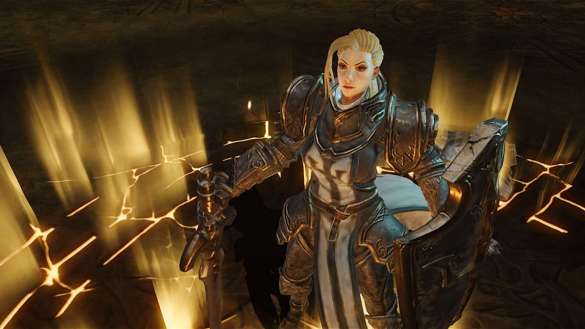 Diablo Immortal is a hack and slash adventure game that places you in the events between Diablo II and III. Corruption and cultists run rampant, and you, brave warrior, might be the only thing stopping the Worldstone from being pieced back together. But to do so, you’ll have to pick one of the six classes, Diablo Immortal, and refine it using the skills, Legendary Gems, weapons, and armor the game offers.

While the “best” build will be the one that suits your play style and your goals, here are some of the most powerful builds for the six classes in Diablo Immortal’s Season 8.

The Best Barbarian Build for Diablo Immortal in Season 8

If you’ve checked out our tier list for the best Diablo Immortal classes, you’ll know that the Barbarian is S-Tier in both Overworld and Battlegrounds. It’s a class that’s capable of soaking up and dealing damage in equal measure and the sheer survivability is of the charts.

There’s one build that’d a fan favorite of the class and it’s the “Spin to Win” or Whirlwind build. The concept is simple: spin, deal damage, and win. Here’s everything you need to know.

Put it altogether and you’ll have a build that makes your skill, the Whirlwind, a cyclone of pain.

The Best Crusader Build for Diablo Immortal in Season 8

The Crusader tends to lean a bit more supportive and cooperative than the Barbarian, but it’s still possible to pump up those damage numbers. This build utilizes the Crusader’s high mobility and survivability with a focus on the skill Draw and Quarter, which is particularly helpful if you’re playing solo.

This build then breaks down into two phases. The first phase will involve self-buffs with Consecration or Spinning Shield and is then followed by the mobility-damage phase which focuses on Draw and Quarter.

The Best Monk Build for Diablo Immortal in Season 8

Like the Barbarian and Crusader, the Monk is a class that must be close-range to score the big hits. But the Monk isn’t a tank and can’t soak up damage like our heavy-armored classes. Instead, the Monk makes up for this with incredible mobility. It’s this mobility that makes the Monk one of the most fun classes to play. And it’s a class that even recently got a buff to its auto-attack.

But if you want to see how far it can go, the Seven-Sided Strike build is a fantastic choice. It focuses on killing speed and movement, with half of the skills being movement-based. With this build, the Monk draws aggro by entering the radius of enemies and, once you have a sufficient number focused on you, you can then obliterate those enemies with Exploding Palm.

The Best Necromancer Build for Diablo Immortal in Season 8

The Necromancer is a summons class that brings to the field undead minions and environmental hazards. I might be biased, as someone who first rolled Necromancer, but there’s no denying that this class has the highest damage potential in PvE in the game, as well as fantastic utility with both crowd control and shielding. But in PvP, Necromancer has grown even more deadly, not only because of its utility but because of a newly added main hand. This build focuses primarily on defeating enemies as quickly as possible while maintaining high momentum, which makes it excellent for bounties and solo content.

The Necromancer can be absolutely bone-chilling with how deadly it can be on the field with the right build. Here’s how to send your opponents to an early grave.

Related: How to Find and Defeat the Sandstone Golem in Diablo Immortal

The Best Wizard Build for Diablo Immortal in Season 8

This spell-slinger does well in both PvP and PvE, offering both raw damage and area of effect attacks. The Wizard can easily clear out a map in the overworld. In PvP, the Wizard offers utility with its crowd control. With this Meteor and Teleport build, you should be able to solo PvE activities with plenty of power and mobility.

The Best Demon Hunter Build for Diablo Immortal in Season 8

A ranged class that’s been one of the best classes for the past few seasons. This is one of the most mobile and smoothest classes to play with ample survivability. This build emphasizes the Crossbow Shot to quickly plow through enemies, maximizing your killing efficiency.

With this build, your goal is to pull as much aggro from enemies as possible then drop a Rain of Vengeance. As your enemies are being bombarded, turn them into pincushions with your arrow-based abilities.

Related: Diablo Immortal Tier List: Which Class is the Best?