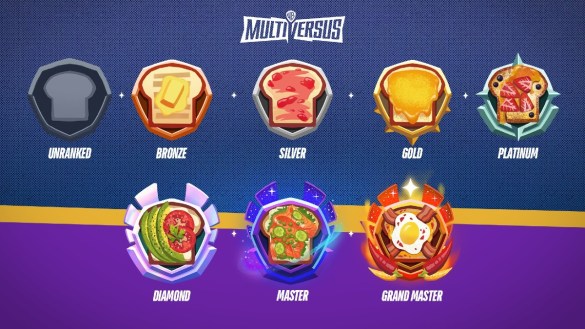 I’ve been playing a ton of MultiVersus lately, and it’s not just because I’m desperately trying to wrap up the season one battle pass. The week of November 7 also gave us the Ranked Mode Alpha, a brief test run for serious MVS matchups. A huge update also really addressed network issues across the board, so it’s a great time all around. I’m not a huge ranked person, but I am a huge fan of the emblems representing each rank! I always thought MultiVersus’ toast thing was silly in an eye roll kind of way, but now I’m all the way on board the Toast Train.

Seriously, these ranked rank icons are brilliant. If you’re gonna have a bit, I say you gotta swing for the fences. And this is a home run-ass swing from the folks at Player First Games. So much so that when I shared the image in the Prima Games Slack channel, there was a solid ten minutes of not just appreciation, but favorites. So I thought, we sure do have some Toast Takes here, perhaps we’re onto something. Then my ADHD-ridden brain clicked like a pencil getting caught between two gears, and one phrase manifested inside and took root.

It’s time to tackle the million-dollar question: which of these is the Top Toast? Which one deserves to be the end piece on the bottom of the rankings loaf? Were any of these mislabeled, or is the Toast Trajectory parallel with taste? It’s time to rank some ranked ranks.

I know I said I’m all aboard the Toast Train earlier, but there’s one exception. What the fuck am I looking at here? Is that marmalade? Honey? Some kind of weird European thing I don’t recognize? This is some Cringe Crust in my book.

Jam on toast is a classic. Simple, purposeful, and attractive. Well, except for this spread. Who the hell just gives up like this in the middle of a jelly journey and leaves those horrid clumps of fruit guts sitting next to open spaces of bare bread? Shameful. I’d still eat it though.

There’s a reason this Toast Tragedy is in outer space because I’m not convinced reasonable humans would recognize what this is, much less eat it. That said, at least one person on the Prima Teama said this was their favorite, and I do admire the complexity of… whatever this is.

Another classic, this time much less sloppy-looking. The butter isn’t melted, and maybe that’s a little too much butter, but you can see it melting, and perhaps it’s less butter than it seems. It’s really just getting started, which is perfect for the first rank. But also, why is that hideous jelly mess higher ranked? Player First is clearly on the take from Big Jam.

I dunno, something about the starting point of a group of toast-themed ranking emblems being an empty space that’s still toast-shaped is very good. You know you want the toast, and maybe even need the toast. You can see it, but you can’t taste it, smell it, touch it. It’s merely a formless void, a Toast Tartarus you can escape from if you put in the work.

I question the arrangement, but that actually looks like it tastes pretty damn good. Say what you want about Millennials and avocado toast. I don’t really care. Honestly, I’ve never had avocado toast. But it looks damn appetizing here. That’s a toast worth tasting.

Breakfast is the best. That’s an inarguable fact of life, and the reason Waffle House exists. I mean, aside from being aligned with government crisis response efforts during natural disasters. I don’t think iHop helps with that but they do alright with breakfast too. Especially with eggs. I can do without the weird pepper fanfare though, and I’m not comfortable with whatever that spread under the egg is. It looks kinda like pimento cheese, which would be a day ruiner for me.

Here we go, folks. The cream of the crop, or in this case the Titan of Toast. It’s got everything you want out of a great toast. Fruit? Check. Some kind of sweet spread that actually looks like honey this time? Check. Powdered sugar? Yeah why not. Could it use some banana and maybe some syrup? Of course. But this one is the one I would pick first to chow down on without question. It’s clean, it’s colorful, it’s breakfast. If this was for Grand Master I’d be shooting for the top 100 every day.

I’m not really sure what just happened here, but my body feels a lot lighter. I wonder if Player First got any feedback on the ranked ranks, or if we’re the first to break bread. Will any of these change when the real ranked mode finally rolls out, or will each toast stand the test of time? Either way, I don’t see this style going stale anytime soon.