Sonic Frontiers: How to Get and Use Gold Cards Explained - Prima Games
Tips

Sonic Frontiers: How to Get and Use Gold Cards Explained 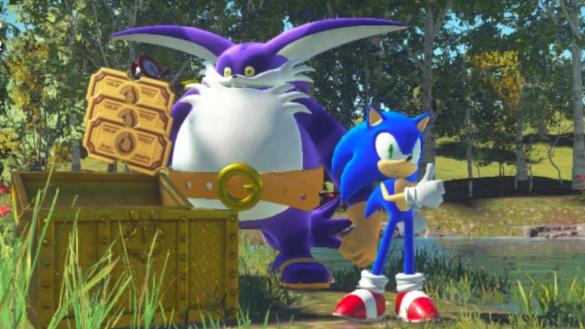 What are Gold Cards, you ask? They’re an item that you can collect which lets you redeem rewards like Portal Gears and Amy’s Memory Tokens for free from Big The Cat. And who doesn’t love a good freebie? Here’s how to get and use Gold Cards in Sonic Frontiers.

How to Get Gold Cards in Sonic Frontiers

To get your mitts on a Gold Card, you’ll need to fish up a Treasure Box at a fishing spot. Check out our How to Unlock Fishing in Sonic Frontiers guide if you’ve yet to do so. Also, don’t confuse these with Treasure Tokens that you get automatically with every catch you bring in.

There’s no special technique for fishing up Treasure Boxes – it’s random. So it’s a good idea to go into the mini-game with as many Purple Coins as possible as one attempt costs one Purple Coin and it may take you a while.

You can also catch Golden Treasure Boxes which contain three Gold Cards instead of one. This is a rarer chance obviously so don’t go in expecting to reel them in at the same rate as the regular Treasure Box.

How to Use Gold Cards in Sonic Frontiers

Big The Cat offers a selection of wares that you can trade in your Treasure Tokens for in his “Trade Tokens” menu. We’re talking Seeds of Power and Defense, Chaos Emerald Vault Keys, Lost Koco, and more. This menu is also where you can use any Gold Cards you’ve fished up.

They can be redeemed for anything on Big’s menu in place of spending your Treasure Tokens, which can be great value and save you a lot of Tokens in the long run, especially if you trade one for something expensive. So it is worth trying to catch a couple of Gold Cards every time you go fishing so that you can splash your Tokens on cheaper rewards and get more bang for your buck.