Otherwise, it's hard to tell what's going on in the game 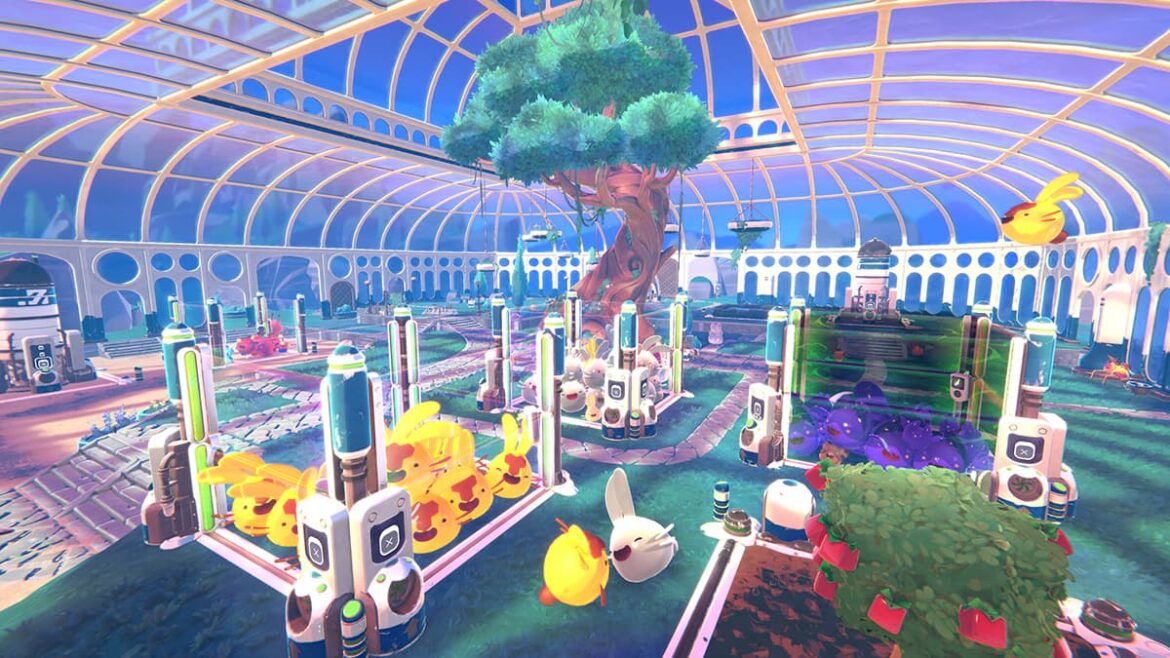 In Slime Rancher 2, you’ll notice a dense fog covering the map as you travel around each area. To uncover this, you’ll have to interact with what’s known as Map Nodes, happy-looking holograms that magically get rid of your map fog. While you don’t need these to progress, they’ll make your life easier as you navigate each region. If you’re interested in learning more, continue reading to find a comprehensive and ever-growing list of all the current Map Data Node Locations in Slime Rancher 2.

Map Data Nodes are small holograms you interact with to clear map fog. You’ll find a few in each area that eliminates a small amount. Since there’s no indicator on the map telling you where they’re located, you’ll have to search around and activate them! In case you’re having trouble with that, though, the pictures and descriptions below are here to help you out.

Below is a list of all Map Data Node Locations in Slime Rancher 2 that we’ve found so far, organized by in-game regions, that’ll update over time.

Head west just out of the Conservatory past the various fields of pink and cotton slimes. After passing under a large archway, keep moving forward until you see the node in-between two large boulders near the Cotton Gordo’s spawn area.

Before travelling here, make sure you have the Jetpack upgrade!

Upon exiting the portal from Rainbow Field to Starlight Strand, either go through the northern door or fly over the wall until you reach the beach. Head up the ramp and onto the platform before looking north to find the map node. Fly over to it to activate it!

Starting from the teleporter, head south along the path and veer left towards the pink grass. Use your jetpack to fly up before turning right. Continue south towards the Pogofruit tree before flying around the mountains. You’ll land directly on the ledge to the map node.

Starting from either the teleporter or the previous location, head south along the paths until you reach the southern portion of the map. If you’re currently in the blue grass half of the map, go to the pink half before venturing further. Continue south, taking eastern routes whenever possible until you reach the stone bridge connecting the main island to the node’s area. If needed, use your jetpack to fly around the mountain to reach the bridge.

After crossing the bridge, climb up the ramp and head into the ruins before you find stone slime statues on a ledge. Fly up here to find the map node against the western wall.

Upon teleporting from Rainbow Fields to Ember Valley, head west until you reach a large ramp leading you southwest. Climb this ramp and continue travelling west until you find a ledge with a seashell carving engraved into the side of a mountain. The node is located on this ledge. Use the nearby water spout to jump up here.

If you don’t have the Jetpack, bring it for the next two nodes!

Head back to the previous map node location and fly northwest towards the two entranceways. Go into the one on the right, travelling north. Enter the cave at the end of the path and venture through it until you find an area with a waterspout in the center. Using this water, jump up to find the map node along the western edge of the platform.

Related: How to Get Ash in Slime Rancher 2

Go back to the first map node area. Rather than heading north, travel west towards the lava area with the boom largos. Keep the high ground, flying onto the cliffside platforms as much as possible, until you find a lush bridge connecting two mountains. Fly onto this bridge, head south and traverse through the trees until you find the map node pillar. Fly over here to interact with it.

Slime Rancher 2 is available in Early Access on PC and Xbox Series X/S through Steam and Game Pass. If you’re interested in learning more about the game, check out our Slime Rancher 2 File Size and our Fabricator Guide.