Do You Need to Play the First Game Before Mario and Rabbids Sparks of Hope? - Prima Games
Tips

Do You Need to Play the First Game Before Mario and Rabbids Sparks of Hope?

Will you miss out on Deep Rabbids Lore? 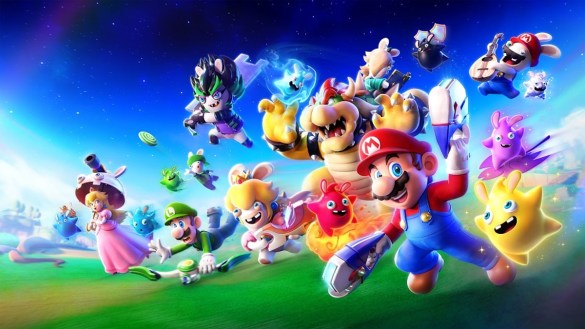 Mario + Rabbids Kingdom Battle was a surprising RPG mashup of unlikely elements. Somehow that turned out great, with one of Ubisoft’s better-received new efforts in a long time. Now there’s a sequel, and it has everything in it that made the first game so appealing and more. But maybe you missed it the first time around, and Sparks of Hope is arriving at the perfect time. You don’t want to feel like you missed out though, right? Is there even enough lore in these things to worry about? Is it necessary to play Kingdom Battle before Sparks of Hope to get the full experience?

Can I Skip Kingdom Battle and Go Straight to Sparks of Hope?

For the most part, I think the answer is no, you don’t need to play the first game before starting Sparks of Hope. While it’s true this game is a direct sequel to Kingdom Battle, there isn’t really enough going on that missing out will result in major confusion. The stories are connected, but from the get-go, Sparks of Hope is mostly self-contained. And for the major stuff, there’s a little codex kind of filling in the table setting.

All you really need to know from the previous adventure is that Mario and his Mushroom Kingdom homies are now co-existing with the Rabbids. It seems like whatever multidimensional shenanigans took place before didn’t get fully reversed. So now Rabbids have spread throughout the… Mario Galaxy, inhabiting various planets and bringing their bizarre antics to new frontiers.

Also, there’s a weird universal translator thing in place, meaning the Rabbids can be communicated with now. That’s a whole thing but you can read my thoughts over in the Mario + Rabbids Sparks of Hope review.

Related: Can You Make Your Party Bigger in Mario + Rabbids Sparks of Hope?

Beyond the setup there, you aren’t missing anything important. This is a cartoony game for casual players and beyond, and the onboarding is very simple and friendly. If you know the Super Mario crew, you know who these characters are. If you look at the average Rabbid you immediately understand what a Rabbid is. Done deal. And the gameplay is introduced via plenty of tutorialized so there’s no expertise needed. Tons of the structural stuff is brand new anyway. So yeah, go for it.

Kingdom Battle is certainly still worth playing but if you’re short on time there’s no reason to stop you from starting at Sparks of Hope.