Do Pokemon Show Up as Shiny in Tera Raid Battles in Pokemon Scarlet and Violet? - Answered - Prima Games
Tips

Do Pokemon Show Up as Shiny in Tera Raid Battles in Pokemon Scarlet and Violet? – Answered 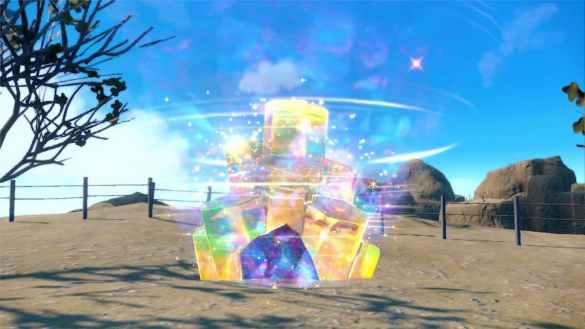 Even with the introduction of so many shiny odds-increasing methods, meeting one of those neatly colored Pokemon is still a rare sight in Pokemon Scarlet and Violet. That’s still a 1/4096 chance if you have no bonuses such as the Shiny Charm in your inventory or special Sandwiches, one of this generation’s features, currently activated.

Another of its features is the introduction of Tera Raids where we fight fierce Terastilized Pokemon and get a chance to catch them after the battle. Those are not as rare as shinies, but have you ever wondered if your Raid opponents themselves can be in their shiny forms?

Can Pokemon in Tera Raids Be Shiny in Pokemon Scarlet and Violet?

Although an extremely rare occurrence, Pokemon in Tera Raids can be shiny as well. You just need to be lucky enough for that to happen, and I mean extra lucky. Any of the aforementioned methods that would increase the Shiny odds won’t work in Tera Raids, so you’ll always have a pure 1/4096 chance of finding it.

And yes, you will see the Pokemon as shiny during the raid! However, certain shiny Pokemon are very hard to notice due to the Terastallize effect, so be sure to pay extra attention.

If you need more proof, the image above shows a shiny Ralts in a Tera Raid Battle!

Related: All Shiny Sandwich Recipes in Pokemon Scarlet and Violet

The only exception to this rule is Pokemon from the 7-Star Tera Raids, such as Unrivaled Charizard or Cinderace. They can only be caught once per save file and cannot be shiny at all. That doesn’t mean you can’t catch them and breed until you get a shiny, but it will take a little bit longer. At least you have things like the Masuda Method to help you out with that.

While it’s understandable why the event-exclusive Pokemon would be shiny locked, the reason behind regular Tera Raids Pokemon having hard-coded fixed shiny odds is completely unknown. Maybe they just wanted to make them REALLY rare. Well, they did it. It’s common behavior to always catch a shiny, but make an extra effort if said shiny is found in a raid, as those are some of the rarest possible encounters in the game.