No plans on stopping anytime soon 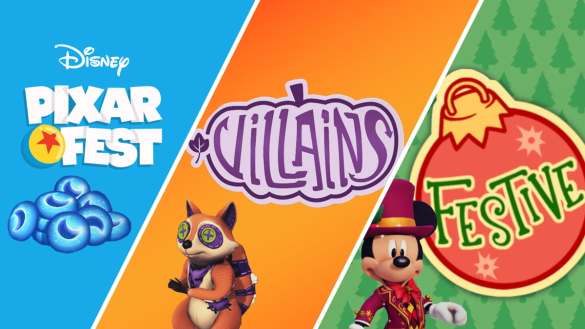 Shortly after hopping onto Disney Dreamlight Valley not too long ago, I came to a realization as I was sitting here, finishing up Stitch’s friendship quests and looking through my furniture list. As I observed my playtime in this game and saw a shocking 370 hours (and still growing), I tried to think about how that number had risen so much.

At some point, it dawned on me that, alongside going AFK in it often, I’ve spent a great deal of time grinding tokens for the past three star paths. What can I say? I love cosmetics. Rather than bottling all of this up, I want to share what this Disney Dreamlight Valley Star Path adventure has been like and why I’ve been so determined to get every item possible from them.

Since the game first launched in early access to the public in September 2022, I’ve been playing pretty consistently. I’ll be honest, though, and say that I didn’t even realize the Pixar event was happening for the first few days of playing. I noticed the little task popups but didn’t quite know why they appeared. Once I saw the first Battle Pass-like event on my screen, I was hooked.

To quickly sum up what this means, Star Paths in Disney Dreamlight Valley are similar to battle passes in other games. You can get exclusive cosmetics by completing various tasks, rewarding you with tokens to spend on items. While some of these items are free, others require you to use premium currency to unlock. Some of the tasks you’ll do are as easy as making some money, while others ask you to cook specific meals or give favorite gifts to NPCs. This system has stayed consistent with all three Star Paths, starting with the Pixar one at the game’s launch.

Let’s Start at the Beginning

The Pixar Fest Star Path was the first to be introduced into Disney Dreamlight Valley in September before ending in mid-October. We had rewards like the Lightning McQueen Racing Bed, a motorcycle and two full Incredibles bodysuits. There was also a Buzz Lightyear suit display that, although it didn’t mean much to me at the time, is interesting to look back at after experiencing the Toy Story update in early December.

Since this was the beginning of the game’s launch, finishing this Star Path was far more challenging than the ones following it. I particularly struggled since I was unaware of its existence for a while, but after many hours of grinding, I got every reward with two days to spare. I still remember seeing the “Mine Aquamarine” task pop up and groaning over how long it took to finish. Nonetheless, I thrived on the challenge, which improved as we moved onto the Villain Star Path.

Related: Where to Find Aquamarine in Disney Dreamlight Valley

The Villain Path Was My Favorite

I’ll be blunt here; the Villain Star Path is my favorite so far. By this point, I had unlocked every region and started gathering enough materials to comfortably craft and cook whatever I wished. Sure, I had yet to progress in quests fully, and I was still consistently low on resources like gems and coal, but it was much easier to advance through the Star Path this time. I took my time with this one and finished early, allowing me to focus on quests and other content. Since the Scar update was also released around this time, balancing my time between the Star Path and new features was also an exciting experience.

The Villain Star Path also featured some of my favorite cosmetics added to Disney Dreamlight Valley. With rewards like the Raven Wings, Maleficent’s Throne and the Magic Mirror, I was happy with how many great items I set up around the village and how many outfits I used until the Festive Star Path was released. It was overall a fantastic Star Path that was far less stressful than the first.

The Festive Path Got a Little Interesting

While some people may get tired of this Battle Pass-like system by now, I was also pleasantly surprised by the Festive Star Path. The twist for this third path is that we must complete every task to get all the rewards. As of writing this article, I finished this ongoing Star Path about a week and a half ago, giving me a month to relax, enjoy the holidays and do more quests.

Admittedly, having a good chunk of the Early Access content completed and an abundance of resources took away a bit of the challenge for me. While this may normally take some enjoyment away, I was busy appreciating some of the tasks we encountered that didn’t appear in previous Star Paths. While some are consistent through the three, like giving NPCs favorite gifts and collecting Star Coins, others are new this time. With objectives like crafting Holiday Feast Chairs and Cutlery, cooking Yule Logs and gifting Raspberry Boba Teas, it felt refreshing to do different activities without feeling like a cookie-cutter event.

Little unique changes like this helped spice things up, making the adventure pretty fun. Having both hands full with exploring the Toy Story Realm and unlocking Stitch was also a nice bonus!

Related: How to Make a Yule Log in Disney Dreamlight Valley

Of course, I can’t forget about the cosmetics this time around. For me, the highlight of the Festive Star Path was the Merry Mickey Mouse and Festive Merlin skins. After making a beeline for the Festive Holiday Vest, I swooped in shortly after and unlocked these as soon as possible. While it makes me chuckle seeing Merlin in a bright red winter outfit, I find Mickey’s cute and think every token spent was worth it.

At this point, furniture was a secondary thought to me. I will admit, though, that the Pile of Gifts and Santa’s Sleigh made for some fantastic home decorating opportunities. The Grand Tree is also among some of my favorite furniture items that I own, so I can’t diss the options this time. Considering I don’t use Motifs too much, I would personally choose furniture over those any day, but they didn’t give me the same level of excitement that the character skins did. Fortunately, I was ecstatic over how my festive room turned out after a quick decorating session, so everything worked out in the end.

Related: How to Catch a Kingfish in Disney Dreamlight Valley

At the end of the day, with the time I’ve invested in Disney Dreamlight Valley and the enjoyment I’ve derived so far from these Star Paths, I have no regrets. I love getting cosmetics, and the challenge of finishing each duty for points is satisfying once it’s over. Some events have transpired since the game’s release, particularly thousands of moonstones given away from bug fixes, that have also made this process a little easier. Overall, it’s been a rewarding experience, and I’m looking forward to the next one when the new update comes out in 2023.