I'm not sure this weirdo knows what he's asking for 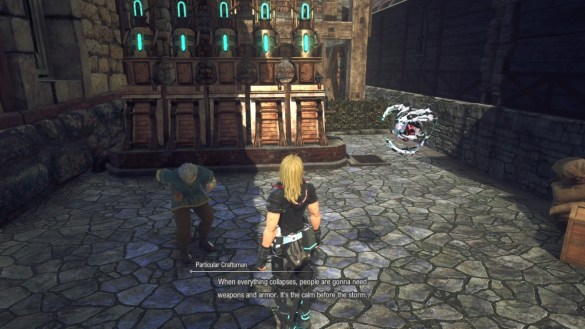 There are some strange side quests in Star Ocean The Divine Force. Not strange because they’re particularly challenging, but strange because you get them with no idea how to complete them. For example, lots of side quests can be found and started before you have unlocked the means to complete them. One of those quests is Delryk Oddball, which asks for five Tattered Robes. Where and what the hell are those?

To get Tattered Robes in Star Ocean The Divine Force you have to craft them. And if you don’t have crafting unlocked yet, you may have run right past it. Or you haven’t quite made it there yet. Either way, check out the guide we’ve linked below to get crafting sorted out. Come back when you’re done!

Related: How to Unlock Crafting in Star Ocean The Divine Force

Now that you can craft, you’re gonna need a bunch of Scruffy Rags. You can buy these at the item shop in Delryk Village (and others I’m sure). Grab a stack of 20 and start tossing ‘em at your designated crafting character. I chose Nina since she doesn’t start with any bonuses, which is kind of a good thing here because you’re trying to make a garbage item.

Otherwise, you can use Laeticia for someone actually good at crafting if you want to build for later. Either way, you’re at the mercy of RNG from this point on. Keep crafting and buying more Scruffy Rags if you need to until you get five of those Tattered Robes. Any variants count too, so if you get a “Tattered Robes +2” or whatever that’s fine.

Make sure to sell all those Tenacity and Evasion Charms to recoup some of the Fol you’re flushing down the proverbial toilet. Hopefully, you just get lucky and make five before you use all that first stack, but it sure didn’t go that way for me.