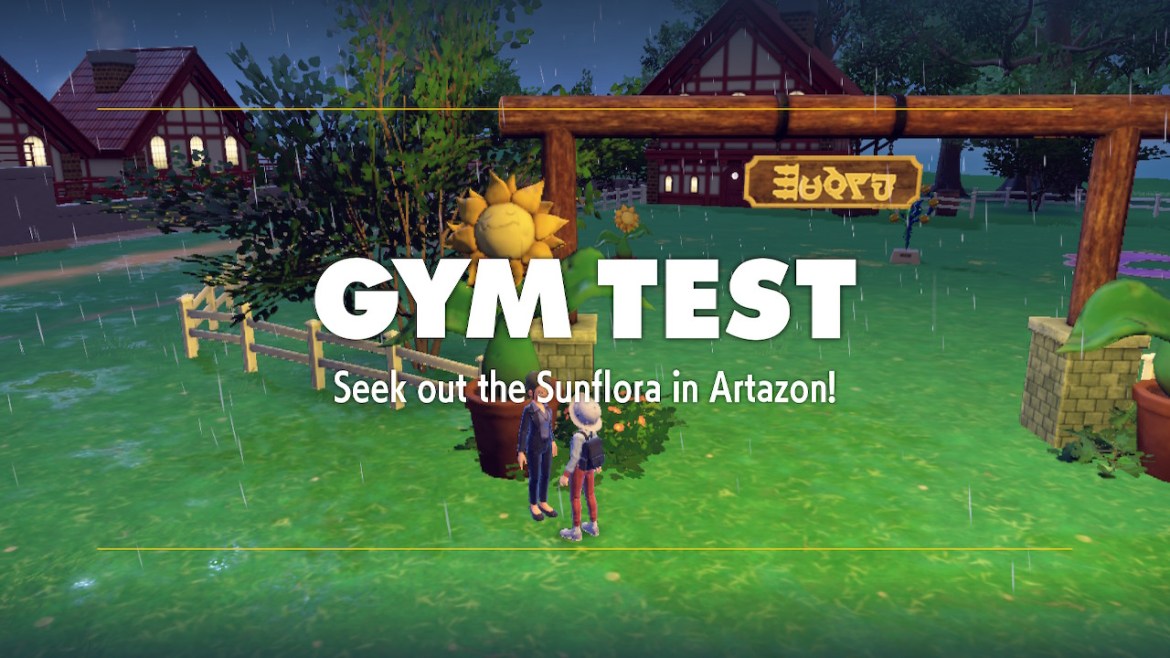 Gym battles are back in Pokemon Scarlet and Violet. If you want to be the very best, you’ll need to defeat all eight gyms around Paldea and take on the Champion’s assessment. In order to challenge the Gym Leaders, though, you’ll need to complete a test. The first gym test is in Artazon, and you’ll need to find 10 Sunfloras scattered across the town. Here are all of the Artazon Gym Sunflora locations to help you ace your exam.

After speaking to the NPC inside the gym office, they will send you out to the Sunflora gardens, where you will begin this arduous journey of collecting ten Sunfloras that have been let loose around town. Below you will find the location of 10 of them you need to collect. It’s important to note that there are more than ten, so you might find some not in this walkthrough, but we’ve listed 10 easy ones to find to help you out.

As soon as you leave the garden, there will be three Sunflora just sitting there. Talk to each of them, and you’re already on your way.

After that, head towards the center of town, and you’ll see the Sunflora siting on the edge of the grass. Go up to it, and it will run away. Chase it down and click A to initiate a battle. Defeat it, and the Sunflora will join your squad.

Walk northwest of where you picked up the fourth Sunflora to find this one near the two benches on the edge of town.

Related: How to do a Surprise Trade in Pokemon Scarlet and Violet

Head to the entrance of this town and look to the right of the fake Sunflora plant. You’ll see one—this one you will also need to chase down and battle for it to join your team.

Head back to the center of town. Climb up to the windmill platform to find another Sunflora just sitting in the middle of the court.

Now go back down and look under the windmill platform on the opposite side of the town entrance. Here you will find your eighth Sunflora.

Head towards the exit of town (opposite side of town from where you entered). Here you will find a replica of the entrance area; however, a Sunflora will be on the left side of the fake plant.

Head over near the hedge maze to find one final Sunflora sitting by a small pond.

After this, you will have all of the Sunflora you need to take on the grass-type gym leader Brassius. Be sure to have something that can defeat him. If you need help, look at our type and weakness chart to ensure you’ve got a strong team to compete with.