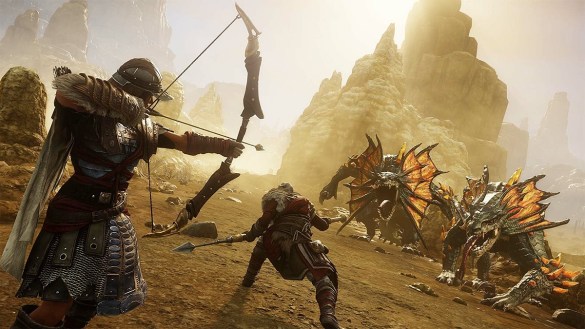 A new update for Amazon’s New World is coming in October 2022. The new expansion of the popular MMO is named Brimstone Sands and it brings new zones to explore, numerous new weapons, and some new expeditions as well. There are also various new mechanics that will be added to enrich the New World experience. But many players are not sure when they will actually be able to play. Does New World: Brimstone Sands have a release date yet? Let’s find out.

The slight confusion about the release date probably comes from the fact that this update is already available to players who participate in the PTR (public test realm) server, but when will this update be available to everyone?

Although this update was originally announced for September, as this month is slowly coming to an end, even though September 28 is the game’s anniversary, it is clear that Brimstone Sands will come to the public servers sometime in October. For now, there is no exact date, although most “insiders” claim that the release date is possibly October 18.

Related: How to Obtain the Minor Rune of Holding in New World

The strange thing is that Amazon launched a couple of new servers today for the anniversary of the game and the Brimstone Sands update seems to be coming later. What’s even more strange is that we know that this update will bring a complete revamp of the early game, so the question arises, why do we have new servers before the update? If Amazon miraculously decides to suddenly release Brimstone Sands today, we will let you know in this article as we will follow this story as it develops!

UPDATE: So we finally got the date! The Brimstone Sands update for Amazon’s New World will be released on public servers on October 18, 2022, as it was confirmed on the game’s official Twitter page.

For more New World guides here on Prima Games, check out New World: How to Get the Woodsman Armor Skin, How to Get Azoth in New World, and How To Level Up Harvesting Fast In New World.