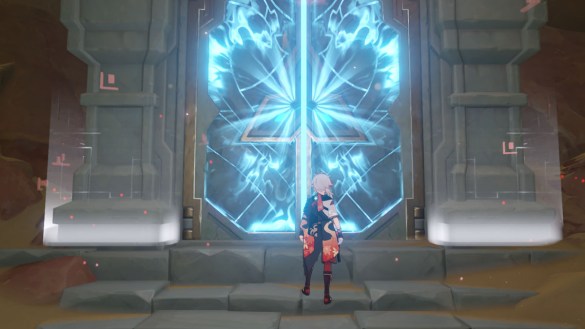 One-time domains in Genshin Impact are a curious type of dungeon. Instead of rewarding us with a few pieces of Artifacts with random stats or Talent Books, they instead give us a mix of both of them together with a few extra Primogems and some Mora. These rewards are nothing to scoff at, so hitting domains such as the City of the Deceased is important when gathering resources.

This is a new domain introduced in 3.4 version “The Exquisite Night Chimes”, and finding it will involve a little bit of extra searching. Here’s how you do it.

How to Find and Unlock the City of the Deceased Domain

This domain follows the trend of “lots of things hidden underground” that Sumeru has been imposing during its latest patches. To find it, head to the Setekh Wenut Boss hideout and follow the trail to the rightmost tunnel. There’s a Seelie waiting for you here if you haven’t followed it yet.

Following it will open a hole in the ground, which is precisely where you must go. Follow the tunnel to find a vine wall to your left and a few stone puzzles around an open room. You can ignore those puzzles for now, so keep heading forward to reach the other side of the tunnel. The vine wall will be to your left again (and you can open it with the Dendro pillar), but jump down in the hole to the right.

Related: How to Unlock the Fane of Panjvahe Domain in Genshin Impact

You’ll be greeted by a few slimes and some Consecrated Beasts up ahead. Defeat the beasts and activate the Anemo Pillar to trigger the wind currents. Use them to reach the highest level of the tunnel, where you can finally find the domain immersed in sand.

Now all that’s left is to activate the four fire torches around the entrance and interact with the cube to unlock the City of the Deceased.

The domain itself is pretty straightforward as all you need is to keep following the arrows to reach the end. You should have no problem with it as long as you have the recommended Anemo and Dendro elements in your team.