How to Unlock the Fane of Panjvahe Domain in Genshin Impact

More Freemogems on the way 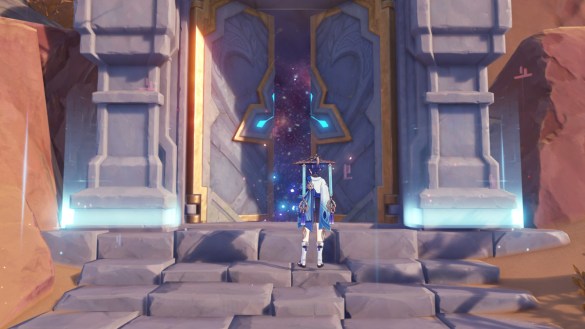 Exploring the Desert of Hadramaveth in Genshin Impact will have you the usual Sumeru treatment for exploration, which is going up and down the area searching for secret passages and hidden-in-plain-sight treasures. One feature that combines both of those is the Fane of Panjvahe Domain, another of those instances with one-time rewards that later will serve only as an extra teleport.

These rewards are not something we would pass on, though, so here’s how you can find and unlock the Fane of Panjvahe Domain.

How to Unlock the Fane of Panjvahe Domain in Genshin Impact

This domain is fairly easy to find as it’s right on the surface and won’t have you diving into those dirty tunnels. If you’re just entering the desert, going through the entrance on Old Vanarana is the best choice. Keep following the map until you reach its location in the northern area of the desert.

When you reach the domain, you’ll find it underground at first, and you’ll have to bring it up by completing a few Seelie puzzles. And if you’ve reached this far on the map already, this should be no problem.

The first Seelie will be found by heading right facing the domain, next to a Shrine of Depth. It is guarded by a Ruin Drake, so just make quick work of that before following the small spirit back to the Domain.

Related: Where to Get Sand Grease Pupa in Genshin Impact

The other one is on the puzzle on the left facing the domain, with a few stones with strange symbols and a Seelie flying through them. To solve this puzzle, hit all three stones to make their symbols match the ones behind each of them before the Seelie touches them. If you did it correctly, you can now follow the Seelie back home.

With both of them in their respective places, the Fane of Panjvahe Domain will now be unlocked. Interact with it and enter to face a battle challenge that favors the Quicken reaction. Your final reward will be a Precious Chest alongside other rewards, which include some Mora, a few Sumeru Talent Books, and 40 Primogems. A worthy reward.