How to Play Es’owa in Star Ocean The Divine Force

Why are all the pieces pawns 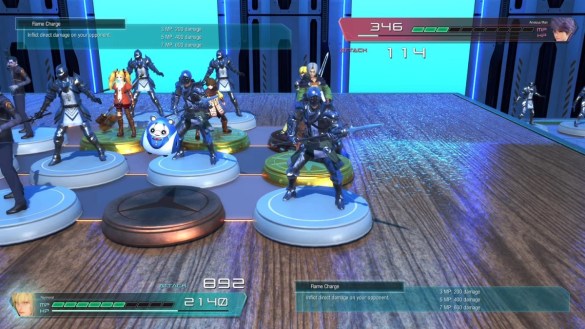 Okay, so, you’ve been playing Star Ocean The Divine Force for a few hours. You’ve gotten the story rolling, gotten used to the VA gimmick thing, and unlocked the minigame Es’owa. Now you have to decide between continuing your progress or diving into what could be a massive time sink. But does the game even give you a decent tutorial on how to play? Are there any good strategies or tips included, any dos or don’ts? There’s a decent tutorial, but otherwise you’re on your own. Luckily I’m playing Star Ocean The Divine Force and Es’owa stood out to me as the main guide food early on. Hopefully I’m right! If not, well. Nothing you gotta worry about. Anyway, videogames.

Related: How to Unlock Es’owa in Star Ocean The Divine Force

Like I mentioned in the unlocking guide, Es’owa is reminiscent of Chess, Tic-Tac-Toe and Go for various reasons. Chess is mostly an aesthetic resemblance, as you use “Pawns” and place them on a checkered board. From there that piece of the comparison tapers off. But it’s important nonetheless, to understand the board and how it works. Each game of Es’owa takes place on a board made into a given grid, which can vary in size. Here’s a basic one early on:

As you can see, it’s a 3×3 checkered board. However, you actually place your “Pawns” on the intersection points thus making it more of a 4×4 in practice. This is important because as you could probably guess, you can put a pawn down anywhere on the board on your turn, and placement is crucial.

On every turn, each player places one pawn by default. Then, the numbers you see hovering above them are applied as damage to either side. Take out your opponent’s HP and that’s game. Each pawn has a role, and an ability that will trigger when placed. These abilities are tied to the role, and you can’t have more than five pawns of a matching role in your deck. And your deck can’t exceed 20 cards. Here are the roles and what their abilities are:

You’ll notice MP and the “graveyard” mentioned up there. We’ve already established Attack is the number each pawn has. You get one MP when you place a pawn (with Commander pawns getting two), which you can use to fire off your deck’s Special Move. You get to choose from a few, each one giving you a modified result based on how much MP you have when you pop it. You have to use your Special Skill before you place a pawn, so don’t forget that.

To send pawns to the graveyard, you have to surround them. This is where placement comes to be so crucial. If there’s a space considered “surrounded,” you cannot place a pawn there. If your pawn is in that space before it becomes surrounded, that pawn is donezo. Getting that surrounded status can happen in many ways, and generally works by closing a space with opponent pawns on the other side. Take this example:

As you can see, by closing off that whole corner I was able to take out my opponent’s entire group. This is why you have to be careful! You don’t want to leave yourself open to getting walled off like that because there’s no coming back from it, especially on the smaller boards. You can close off bigger spaces too when it comes to sending pawns to the graveyard, but it doesn’t make the whole space unavailable; if there’s enough room your opponent will still be able to place pawns.

If you win, you’ll get some kind of reward. It seems like you get a new pawn if you win against a person for the first time, then get money after. If you lose, you don’t lose anything so don’t worry about it. You don’t get bullied here like you do in stuff like Triple Triad.

This is a beginner’s look at Es’owa since I’m writing this guide pretty early on. It’s a simple game to get a hang of though, and seems to be a lot about getting stronger pawns early on. There’s some cool ones too, such as the ones you get from older triAce games like Valkyrie Profile and Radiata Stories. You can equip pawns too for various stat bumps, and still use them in matches!