Also always keep an eye out for bunnies. No seriously 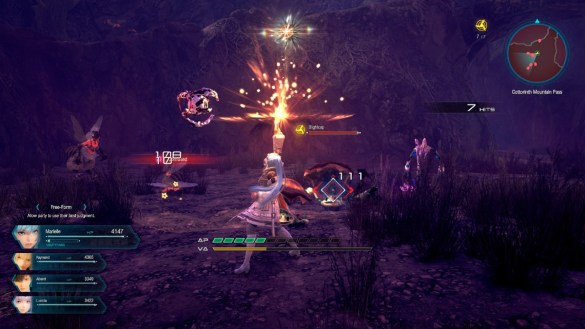 Your Protagonist Kicks Off the Vibe

The Divine Force is a game heavy on the parallels, using the juxtaposed genres to really drive home the vast gap between these groups of people. In other words, there’s fantasy and there’s sci-fi and they mix it together real nice-like. It’s the same with your initial protagonist choice as well. Your perspective will favor either the sci-fi or fantasy stories depending on who you go with. Not a humongous difference, mind, but a meaningful one.

Lots of these JRPGs with real time combat tend to separate concepts like “attacks” and “skills.” By that I mean while skills consume resources, attacks often don’t. But here that’s all out the window. There’s no basic “attack” move; everything is considered a skill, and those use up AP. So if you’re the type of JRPG player who leans super conservative with MP (hi), you can’t be concerned about that in The Divine Force. Like, literally. You can’t.

One of the more intimidating features in The Divine Hope is the dash move you get from D.U.M.A. – particularly the Blindsiding thing. Because the dash moves so fast and aggressive and the physics of it all are poorly explained, it seems more complicated than it really is. Try not to overthink it and just experiment with it, and eventually it clicks. You’ll be juggling giant ogres in no time.

The open areas in this game aren’t quite “open world,” but they’re pretty big. It doesn’t take long before you’re granted a pretty convenient fast travel option. There’s a big drawback, though. If you hoof it to your destination, you’ll be treated with dialogue. Not only is it all voiced, it’s generally relevant to what’s going on at the moment. So if you want a little extra flavor from the cast, but also get bored running, you have a choice to make. The game does warn you of this every time you go to fast travel though, which is helpful.

A huge part of The Divine Force is slapping together your button combos. You get to decide the placement and order of three three-hit combos, as well as a “hold” alternative for each button. The two heroes get solid enough starter combos (one each), but they go obsolete quickly. You gotta get in there and try new skills and combinations.

The problem you’ll run into is that what happens to an enemy after each piece of the combo ends. Some moves don’t really change the target’s “state,” making them good for openers. Others will knock enemies down, or end with some significant knockback. You don’t want a combo that’s impossible to complete because you keep pushing foes out of reach! Some moves can also be extra effective against an enemy in a state such as knockdown. Make sure to read the finer details and experiment. There are no right answers, but there are definitely some wrong one.

Play the Minigame for Sick Gains

Es’owa is the game’s little side attraction, a board game that’s influenced by Chess, GO, and a few others. It looks generic at first with your starter set mostly comprising silver-armored knights. But you earn new pieces when you beat new players, and you get pieces of characters from Star Ocean history! And if you pick up the game during its launch period, you even get some triAce characters from other games. Like Lenneth!

But that’s not all. You might not give a damn about collecting character toys in the same way I don’t give a damn about God of War or something. There’s a cool twist with Es’owa, in that every game piece doubles as an equippable accessory! And some of the effects you can get are pretty powerful. Because I engaged with this gimmick a few times, I actually didn’t buy an accessory from a shop for several of The Divine Force’s opening hours.

That’s all for now. Just keep in mind there’s very much a kitchen sink approach to Star Ocean The Divine Force. But much like the title’s notable punctuation need, not everything meshes together cleanly. But each piece of this game is rewarding to interact with, especially if you do in with an experimental mindset.