How to Build a Chicken Farm in Valheim: Everything You Need To Know About Chickens - Prima Games
Tips

How to Build a Chicken Farm in Valheim: Everything You Need To Know About Chickens

How to basically do everything with Eggs and Chicken: The Guide. 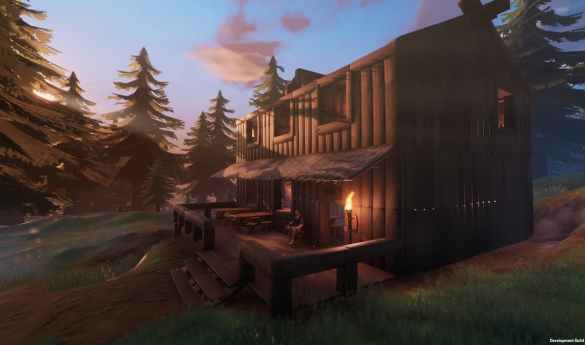 Valheim Mistlands update has enabled us to have a Chicken Farm (or a Chicken Coop, if you will). You have all probably tried building Pig Farms and Lox Farms, as well as Wolf Kennels, but now, a bigger challenge is on the horizon, with much more complex mechanics behind growing your chickens for meat and eggs. In this article, Prima Games delivers the basics of how to build your first Chicken Farm in Valheim, and we’ll also post some cool ideas we’ve found online.

How to Get the Egg in Valheim

Before we move on to our objective of building a Chicken Farm, we need to get the Egg. Because, without the Egg, you can’t have a Chicken. Within Valheim, The Egg came first, so there’s that if anyone on the server asks you this riddle, you are now prepared for that exchange as well.

Related: How to Make Root Armor in Valheim: Is it Good?

How to Unlock the Egg in Valheim

In order for you to be able to buy the Egg from Haldor, you need to do a little pre-requisite, which is killing Yagluth.
If you haven’t cleared the content of the game so far, Yagluth is that skeleton that comes out of the ground in the Plains biome. Fifth boss. Fairly easy to deal with, compared to the ever-annoying Bonemass. You find Yagluth by visiting the Stonehenge-like structures or Fuling Villages in Plains, which will reveal the location of Yagluth to you.
5 Fuling Totems are necessary for the summon of Yagluth.

Related: How to Teleport to Someone in Valheim: Teleport Command Guide for Multiplayer

Where to Buy the Egg in Valheim

After Yagluth is slain, your good friendly neighborhood NPC Haldor will gladly sell the Egg to you for a mere 1500 Coins. You stashed millions of coins while the devs were working on Mistlands expansion, right? RIGHT?! In order to reproduce the chickens, you need two eggs.

How to Build a Chicken Coop in Valheim

Building a Chicken Coop (Farm) has a few pre-requisites:

It’s up to you how you want to build it, but we have a few ideas for you from FireSpark81 and Taxi Service, two YouTube channels that provide some lengthy insight about how a Chicken Coop can look like.

How to Hatch a Chicken Egg in Valheim

An Egg needs to be near a heat source for 30 minutes, after which a young chicken will pop out of the eggshell.

Related: All Cheat Codes and Item List in Valheim

How to Breed Chicken in Valheim

Chickens cannot breed, but Hen can. Every Chicken will grow into a Hen. Within two in-game days, Chicken will reach adulthood. Two happy and well-fed Hens can lay eggs and help you grow your farm. Remember when we said that it should be spacy?

There are a few new recipes that you can craft:

To get the Chicken Meat, you need to slay a Hen with a Butcher Knife. It’s not a 100% drop rate so be patient.

That’s about it for this guide, we hope it was helpful. See you soon at Prima Games!