How to Beat Giganto in Sonic Frontiers - Prima Games
Tips

How to Beat Giganto in Sonic Frontiers

Sonic of the Colossus 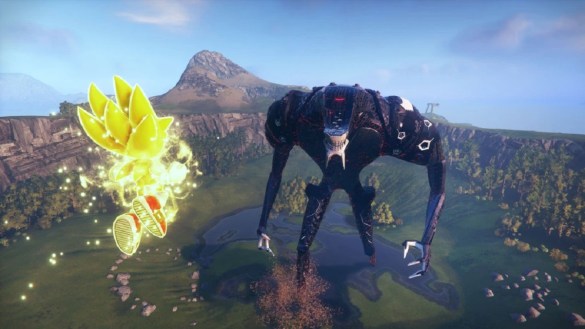 Although Sonic Frontiers offers considerable freedom and a real open-world experience, Sonic Team were not kidding when they coined the term “open zone”. Each of the five Starfall Islands is an open world itself, but you will play through them in a linear fashion, one by one. In each, Sonic collects Chaos Emeralds in order to be able to confront the boss at the end, which represents the final obstacle to progress to another island, ie. the next zone. At the end of the first open-zone Kronos Island, players will encounter Giganto, the first giant boss. Let’s find out how to take this colossus down.

How to Beat Giganto in Sonic Frontiers

Giganto is the final boss of Kronos Island, you will meet him once you collect 6 Chaos Emeralds, and finish the “Grave Mystery” mini-game, the one where you connect the gravestones. We recommend that you make a save before completing this quest so that you can better prepare for the Giganto encounter if you realize that you went too early to face the boss, more about that in a second.

Related: How to Beat the Asura Guardian in Sonic Frontiers

Preparation for Giganto in Sonic Frontiers

If you go to the boss without serious preparation, you won’t have a good time; the huge energy scale that Giganto has will not be emptied so easily. Before you try to down this tough boss, the smartest thing is to do the following:

Starting the Battle with Giganto in Sonic Frontiers

Once you are ready, you finish “Grave Mystery” and start the encounter. As the last Chaos Emerald needed for the Super Sonic transformation is on Giganto’s head, you need to climb up his legs first using a boost and wall run. There are also a couple of obstacles near Emerald that need to be jumped over. Once you get the final Chaos Emerald, you will turn into Super Sonic and the real battle starts.

Boost directly to the head of Giganto, lock on it, and start mashing the attack button. When he starts to wind up for a swing hit with his arms, fly and boost away. Take into account the extra arm swing that may await you as you make your way flying back to the boss. His hand swings can be parried but don’t worry this isn’t Dark Souls, you just need to press and hold L1 and R1 at the right height and Sonic will parry automatically, no timing is needed at all. Parrying his blows is a great way to deal significant damage to the boss, even if you didn’t prepare well and leveled enough beforehand, otherwise keep mashing attacks to down him fast before your rings disappear and you turn into regular Sonic, which means instant fail.

Somewhere in the middle of the fight when the energy scale reaches the mid-point, the second phase will start, which is practically the same as the first, only it has additional lasers to avoid and a powerful beam attack that you counter with QTE mashing. Just keep beating his head up if you are leveled up properly or rely on parry counters to drain the second half of the energy bar down. The final blow will be dealt with another button-mashing QTE… and that’s it!

You are now a Sonic the Titan slayer. Although this fight can seem hopeless at first, with the right preparation and tactics it becomes fairly easy – the game teaches you this concept early on, which you will need for the rest of your Starfall Islands adventures.