Best Eevee Evolutions to Use in Pokemon Go

No matter where they rank, they're all great 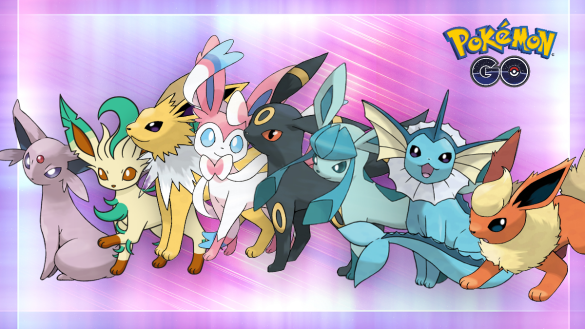 There are few Pokemon as beloved as the Eeveelutions in the Pokemon franchise. Their unique designs ensure that there’s at least one that speaks to you. But when it comes to Pokemon GO, functionality can trump aesthetic, especially when you’re trying to climb through the leagues. So, if you’re trying to think which Eevee evolution should become part of your main team, here are the Best Eevee Evolutions to use in Pokemon GO (2023).

Best Eevee Evolutions to Use in Pokemon Go (2023)

There are 8 total Eevee Evolutions to rank. Their utility (or “best” status) will be determined by how well they do in PvP and other high-level conflicts. They’ll be listed here from worst to best.

Is Flareon Good in Pokemon GO 2023

Out of all the Eevee Evolutions, Flareon is the worst one. Not that Flareon is terrible, it has viability in the Great Leagues and against high Battle Rating Pokemon like Registeel and Abomasnow. But Flareon is a Glass Canon that’s easily outpaced by better picks, like Charizard, Typhlosion, or Alolan Marowak.

If you’d really like to get utility out of this fiery rabbit, the best moves to put on it are Fire Spin and Flamethrower. Technically, Overheat is stronger, but with the debuff, you’ll have to manage it according to the situation.

Is Jolteon Good in Pokemon GO 2023

Once upon a time, when Pokemon GO first made its debut, Jolteon was the electric Pokemon to have. And in certain moments, it can live up to the glory days. If used properly, it can Shield Bait with Discharge, only to bring in a STAB Thunder that can utterly obliterate an opponent who misread the situation.

But Jolteon’s offensive Power is held back by how delicate it is. Suffering the same flaws as Flareon, Jolteon can’t endure in most fights and it’s better to use alternatives like Melmetal and Lanturn instead.

If you bring Jolteon into the Leagues (ideally Great or Ultra at highest), equip Thunder Shock for the increased energy gains, then Discharge if you intend to use Jolteon to bait out shields. Thunderbolt is typically better than Thunder, as it can deal more damage per energy, which will give Jolteon more value while it’s still on the field.

Is Vaporeon Good in Pokemon GO 2023

Like Jolteon, Vaporeon used to reign supreme as one of the best Water-Type options on the market. But it’s slowly been replaced by Gyarados and, even more significantly, Kyogre. But if you find yourself unable to get your hands on that Legendary Whale or unable / unwilling to grind up those Magikarp Candies, Vaporeon is a decent option, on par with Jolteon.

In PvP, Vaporeon still has good bulk and should be played defensively. Its best moves are going to be Water Gun for its Fast Attack and Aqua Tail and Scald for its Charged Attack. Water Gun is essentially Vaporeon’s only decent Quick-Move option, while Aqua Tail gives it a decently quick-charging that is spammable.

You can bring it into both Great Leagues and Ultra League battles, but it will be outclassed by better Pokemon.

Espeon has fantastic utility early-game, with a good attack stat and easy accessibility. But as you get later into the game and begin fighting higher Star Raid bosses, the Psychic Type begins to show its flaws. For that reason, it should be reserved for fights against Fighting-Type raid bosses like Machamp.

Related: Can Seedot be Shiny in Pokemon GO? – Answered

In PvP, Espeon should be brought into your team as a filler if you have nothing better for the situation. It does best in the Ultra League, as more Pokemon in this League have Psychic weaknesses. If you bring it, consider Confusion for its Fast Attack and Psychic Fangs or Shadow Ball for the Charged Attack. Shadow Ball will provide more coverage, giving Espeon a chance to fight back against Ghost-Types.

Is Glaceon Good in Pokemon GO 2023

Glaceon is one of my favorite Eevee evolutions and I’m sad to say that this gorgeous ice type is mediocre at best. She might outshine the original trio, but she’s absolutely forgettable when it comes to challenging content.

Despite Glaceon having a very nice move set, it’s outpaced in every metric by Mamoswine. Bring it into Great Leagues would be a devastating mistake, as Glaceon has no bulk to sustain itself and mono-Ice type is… a detriment, to say the least. Glaceon should be reserved for Dragon-Type raids or even the Premier Cup.

Is Leafeon Good in Pokemon GO 2023

Leafeon outpaces most of the pack, but the absolute abundance of good Grass-Type means that there will always be a better Pokemon available. But that doesn’t mean it’s a bad Pokemon, and it certainly has more utility than Flareon, Vaporeon, and Jolteon.

You’ll see the most use for Leafon in the Master League, surprisingly enough. The CP cap removal allows its Grass STAB attacks like Razor Leaf and Leaf Blade to do significant damage against any Pokemon with Grass weakness. This means that it can occasionally bring down a Groudon and Kyogre. But its overall “meh” stats means that your team will be better off with one of the other, better Eevee evolutions.

Is Sylveon Good in Pokemon GO 2023

If you have Sylveon on your team, you’ll be unsurprised to see it taking the second spot on our ranking list. This Fairy-Type doesn’t have much utility in PvE, but the combination of Charm and Moonblast or Psyshock make it fantastic in a PvP situation.

Related: How to Beat the Grunt With a Buff Physique in Pokemon Go

Personally, I’d have to highly recommend Psyshock as the foundation for your PvP Slyveon build. This will give you coverage against Posion-Type attacks, allowing it to outpace other Fairy Charmers in the Ultra Leagues, where it reaches the height of its performance.

Is Umbreon Good in Pokemon GO 2023

Here it is, ladies and gentlemen. The answer to your question. The very best Eeveelution is Umbreon. While it has a low attack, its Dark-Typing and exceptional bulk means that it can find a place in many team compositions. Where it struggles is against meta-type Fairy and Fighting Pokemon, but the addition of Last Resort and Psychic has given Umbreon the coverage it needs to stay viable.

If you want to see it shine, bring Umbreon into the Great Leagues. But it’s also a very strong Pokemon in Ultra Leagues, as it can reach 2445 CP with Best Buddy boost. This makes it extremely difficult to take down, and it can even dominate Legendary Pokemon like Cresselia and Giratina in the Open Ultra League.