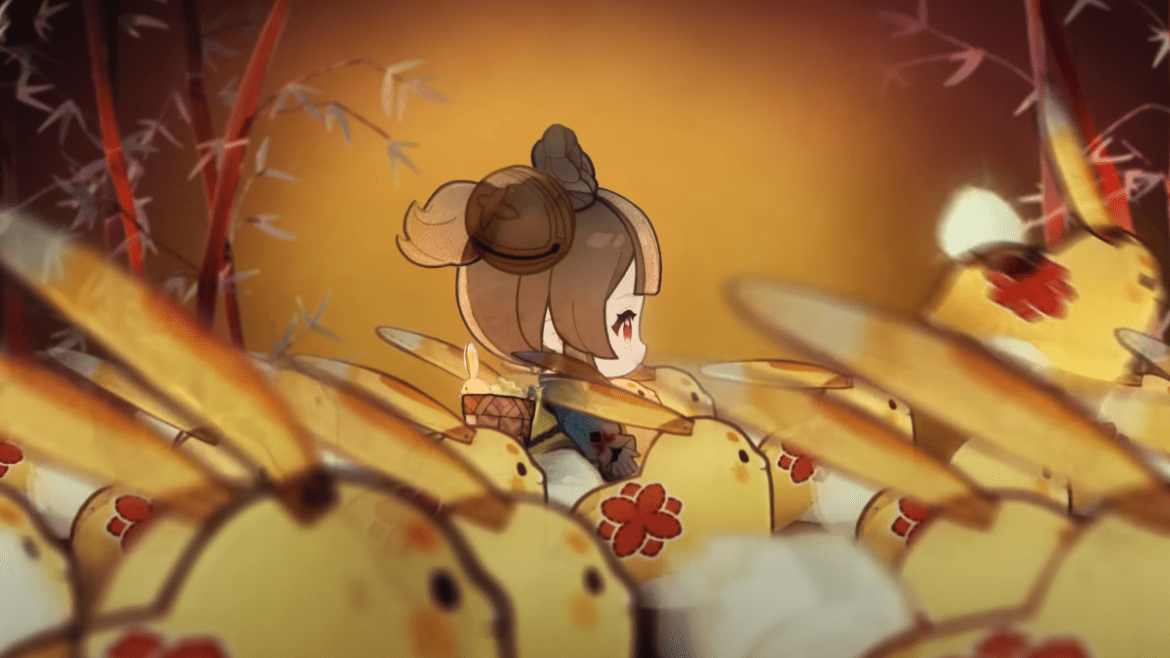 Yaoyao has finally dropped onto the scene in Genshin Impact, and oh boy, is she adorable! Not to be taken for granted though, this girl has been gifted a mechanic by an Adeptus meant to get her out of trouble if she ever pokes her nose where it doesn’t belong. Our first Dendro healer is here, so what’s the best way to build her?

With the help of Yuegui, a special device in the shape of a bunny, Yaoyao can toss out White Radishes to either aid her allies or damage her enemies. In her Elemental Skill, she tosses out Yuegui during battle, and it can either focus on one of two things at a time. If her allies happen to be under 70 percent of health, Yuegui will toss out White Radishes to restore their health which is based on Yaoyao’s Max HP. If the member of the party has full health, then Yuegui will focus on the enemies, throwing White Radishes to deal Dendro Damage to them. But Yuegui isn’t just meant to be used in battle; similar to Kokomi’s jellyfish, you can summon Yuegui to help out your party members if they happen to be on low HP. It’ll bring your party members’ health back to full, regardless of whether their health is below or around 70 percent.

In addition, Yaoyao’s Passive In Others’ Shoes will also help her with healing her allies. The White Radishes that are flung out onto the field will also assist in keeping party members’ health by their AOE boosting health by 0.8 percent of Yaoyao’s Max HP.

Funnily enough, Yaoyao must remain out on the field for her Burst to be fully utilized. No need to fear; her healing will still affect all members of the party or those nearby if you play in Co-Op. The full abilities of Yuegui are revealed as they will deal damage and heal simultaneously. It’ll also increase Yaoyao’s Speed by 15 percent, allowing her to run around dealing her own type of damage thanks to Starscatter. When this passive is unlocked, Yaoyao herself will also throw out White Jade Radishes in the duration of her Elemental Burst every 0.6 seconds.

Yaoyao’s a Support, so it’s better to equip her with a weapon that will make her abilities shine. Since she’s based on HP for her healing, good weapons for that will be the Black Tassel and if you happen to have one or two lying around, then maybe even Homa. But that’s a bit extra. The best types of weapons that you should equip on Yaoyao are going to be weapons that have the main stat of Energy Recharge or Elemental Mastery. A good staple is going to be the one you see in her trial, the Favonius Lance since it’ll help generate particles for the entirety of the team instead of one specific Element.

But her best in-slot weapons are going to be weapons such as “The Catch” which deals in Energy Recharge and does increase the damage of her Elemental Burst, which she needs to be on the field to deal damage and heal her party. Another good choice is going to the Sumeru Weapon that you can unlock after finishing the Aranara Quest, Moonpiercer. With a main stat of Elemental Mastery, this weapon will increase Attack for the user each time it deals damage that results in Burning, Quicken, Aggravate, Spread, Bloom, Hyperbloom, and Burgeon. It’s a perfect weapon for characters that deal in Dendro. Another good choice is the Kitain Cross Spear which also mains its stat in Elemental Mastery. It’ll increase Elemental Skill Damage, and each time that skill hits an enemy, it’ll regenerate Energy so that you can build up Yaoyao’s Burst even when she isn’t on the field.

Artifact Sets – Whether to Build a Healer or a Debuffer

Yaoyao’s got a couple of options for her set of choice and it’s entirely dependent on how you plan to utilize her. She can run as a straight healer and benefit the better part of your other team members by equipping Tenacity of the Millelith. This set at two pieces can increase HP by 20 percent, a needed stat for Yaoyao so that she can heal all the better. And at four pieces, this set will increase Attack by 20 percent and Shield Strength by 30 percent after the character’s Elemental Skill hits an opponent. This set is pretty good for most Supports since it’ll increase Yaoyao’s Max HP and everyone in the party’s Attack.

Another good four-piece set that is on Yaoyao is going to be Deepwood Memories. At two pieces, this set will increase Dendro Damage Bonus by 15 percent and at four pieces, the character’s Elemental Skill or Burst will decrease the opponent’s Dendro Resistance by 30 percent for eight seconds. This effect can trigger even when the party member is not on the field so you can use Yaoyao’s Skill and then switch to other party members to deal damage or set up. This set is primarily good to keep on Yaoyao when using other Dendro characters or when setting up for Yaoyao’s Burst so that she does optimal damage when she’s running around on the field.

Because Yaoyao is a bit of a peculiar and selfish person when she’s using her Burst, she will require to be on the field for the entire duration or at least until you’re happy with your party member’s health. For this and the sake of not having to find four perfect pieces in a set, a mix of Deepwood Memories and Tenacity of the Millelith may also be a viable option. Yaoyao is flexible in these three choices so that you can flex the best parts of her kit whether she is on the field or off the field.

Yaoyao’s best stat will be HP, so when focusing on her Sands, Goblet, and Crown, HP Percentage will be her best Main Stat slot. Now while she does do damage whenever she is on the field with her Burst, it may be an excellent option to invest in a Dendro Damage Bonus Goblet. Whichever set you want to equip on Yaoyao, HP Percent and Dendro Damage Bonus will be the best things for her kit.

For sub-stats, as a support, Yaoyao isn’t going to need as much Crit Rate or Crit Damage, and if you decide to use a Dendro Damage Bonus Goblet, you’ll want to try for HP Percent in the sub-stats as much as you can. Energy Recharge, Elemental Mastery, and Attack will also be really good for her and the entire party. If you don’t have enough Energy Recharge for your weapon, it may be a good stat to hunt for when looking through your artifacts and vice versa if you want to add more Elemental Mastery into Yaoyao’s kit. As a Dendro character, Yaoyao’s attacks will usually coincide with the other elements in your party, so adding to Elemental Mastery will add to that damage. And though she may not be a great damage dealer like your DPS’, she can still contribute whenever she is required to be on the field, so building into Attack will help with that.

When it comes to Supports, you’re always going to want to focus on a character’s Elemental Skill and Burst, and that’s no different when it comes to Yaoyao. Her Elemental Skill will damage enemies and heal characters that fall too low in their health. Investing in that Talent Branch will increase both the efficiency of her healing and her damage whenever Yuegui is on the field with your characters. Her next focus is going to be on her Elemental Burst, and while this does require her to be on the field, it means that investing in it is all the more important. It’ll increase her capacity for healing and deal more damage to her White Jade Radishes as they are thrown, tossed, and jump all around the field.

Constellations – Are They Worth It?

As a four-star, Yaoyao’s constellations are a lot easier to come by, both whether you come by her in the chance of a wish during the 3.4 banners or by Lantern Rite, where you can get her for free. Yaoyao has some pretty valuable constellations that will naturally better her own kit as well as aid her party members.

Such as her first constellation, Adeptus’ Tutelage will increase Dendro Damage Bonus by 15 percent as long as active characters are in the AOE of White Jade Radishes. Her second constellation will help out with her Energy by getting her back Particles when she’s in her Elemental Burst. And the best of her constellations will be her sixth and final constellation, Beneficent, which will amp up her Elemental Skill by a great margin.

Not only will it increase Dendro Damage based on Yaoyao’s Attack, but it’ll also restore the character’s HP by 7.5 percent of Yaoyao’s Max HP. With Yaoyao’s last constellation, it becomes evident that it is important to build into her attack just as much as her healing so that when she or Yuegui is on the field, she’ll help out your party composition instead of just being used solely as a healer.

Is Yaoyao everything you expected her to be? Expected as our free Dendro character, she could easily become a valuable asset to your team!