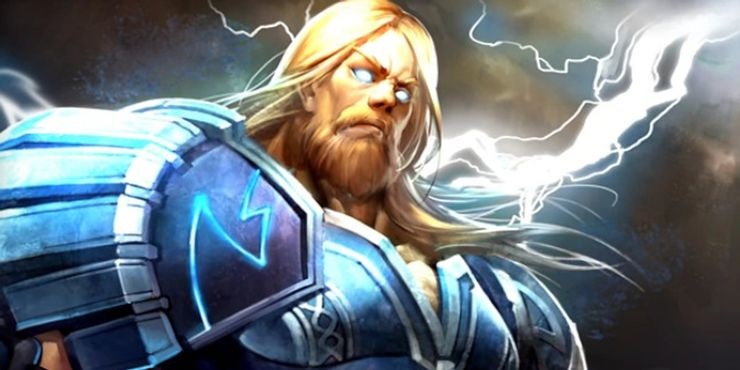 There are 23 Assassins in SMITE. Assassins are Melee Gods that deal Physical damage. In most cases, they are used for sneak attacks from Jungle (Ganks) against enemies and they usually level up in the Jungle. They have kits that allow them to deal bursts of damage that they can dish out in a matter of seconds in order to dispatch a single target as efficiently as possible and also to escape a fight as they are usually not adept at mitigating incoming damage.

The Norse God of Thunder is a great Assassin whether you’re new to SMITE or not. Simple and straightforward at first, he has many different uses and has a very flexible kit which makes him suitable for a wide variety of scenarios:

Thanatos is one of the most potent Gods in the early game, and this is one of the reasons that he ended up on our list. Even though he doesn’t scale well into late game like some other Assassins do, his early assistance to his teammates can set the stage for a fairly easy win of a match if he helps them get the necessary advantage over their lane opponents.

Thanatos is adept at clearing the Jungle fast and can move fast around the map, making him a valuable asset to help his teammates to get kills early, and ever since his release he has consistently seen play at all levels.

Susano has a high learning curve and requires a lot of practice to unleash his highest potential. The God of the Summer Storm uses his abilities to pull enemies close to him and attack them in a quick and orderly fashion. If a God attempts to escape, his Typhoon Ultimate slows and damages anything that comes in its path. Using all of his abilities properly to efficiently annihilate your opponent is somewhat difficult to master, but the peak of this mountain (learning curve) is well worth the climb.

Bastet is one of the most overpowered Assassins in SMITE, is very easy to pick up, and gives an amazing damage output with very little effort. She is fun to play and when you master her, you will be able to rule the map easily and enemy Gods will fear you.

Tsukuyomi is currently the most terrifying God to deal with when it comes to the Assassin class and jungling in Conquest mode. He possesses a rare combination of brutal damage and chases down abilities, making him nearly impossible to escape from, even with proper positioning.

His abilities deal melee and ranged damage, allowing him to follow up with his Ultimate Ability, which makes him dash through targets at breakneck speed (still not faster than Mercury!). Combine all of that with the Silver Moon Caltrops he lays on the ground, which causes bleed damage, and you have the recipe for the best Assassin in SMITE currently.

We’ve reached the end of this list, but as usual, we’ll provide a few honorable mentions because there are just too many great Assassins in SMITE that sadly couldn’t make it here for one reason or another:

These are all great Gods with very interesting kits and playstyles. Most of them have been relevant for years, some got reworked in the past, but all of them can contribute to their teams well – especially when a good team composition is arranged that will make the most use out of all the kits.

We hope that you liked our choices and we encourage you to review our other SMITE content under the game’s tag or by clicking this link.

Also, make sure to check our other class Top 5s below: