The biggest prize: Hot nuggets at your fingertips. 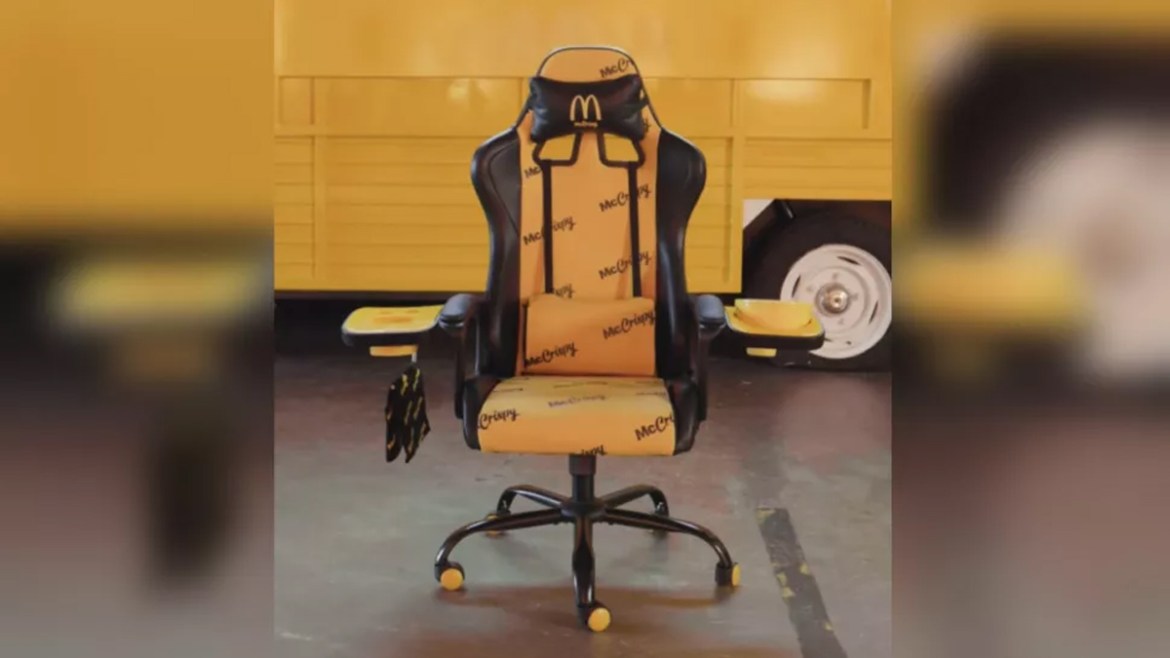 As ridiculous as this sounds, this is a real thing. Someone at McDonald’s has gone out of their way and decided that would be a great idea to create a gaming chair dedicated to having a feast while playing your favorite games. Well, that’s great. No need to worry about my nuggies getting cold while I’m carrying my team in Overwatch!

Or that would be the case if I ended up being lucky to win the chair in the first place. And also if I lived in the UK, because that was the only region blessed enough to receive the graces of getting the McCrispy Ultimate Gaming Chair.

McDonald’s decided to give gamers (or McGamers, I should say) a celebration gift for the successful release of their new “game-changing chicken burger”. You guessed it, it’s McCrispy. And since eating normally at a table is so not cool, they went with releasing the amazing McCrispy Ultimate Gaming Chair.

With an unnecessarily large name to brag about, this yellow abomination of furniture features holders for your drinks and fries, as well as built-in napkin holders and a special thermal compartment dedicated to “keeping your McCrispy warm while gaming”. And don’t worry, the chair is made with stain-proof leather to guarantee no dip stains will ever damage it. Thank goodness, because it would be hard to find a yellow stain around it.

But as implied before, this revolutionary gaming item is not available for sale. Instead, one lucky person will be able to claim it by participating in the official giveaway through the McDonald’s UK Facebook page. Only those residing in England, Scotland, and Wales aged over 18 are allowed to participate.

The pool goes from November 7 to 13, and the winner shall be decided in the following week through a random number generator. They’ll have a 7 days limit to accept their prize, otherwise, another person grabs it. The McCrispy Ultimate Gaming Chair (seriously, why that name needs to be so big?) is the ultimate prize, while two runner-ups will instead get a McCrispy Neon Light. We don’t have images on those, but they’re obviously nowhere as magnificent as the chair is.

McDonald’s seems to have a lot of confidence in gaming marketing. Recently, customers from New Zealand and Australia could obtain the Lightning Tracer skin for Overwatch 2 by ordering certain combos through the MyMacca’s App. This promotion has ended last month, and such codes are probably worth some good cash by now.

On a more serious note, while not having the best of looks, the chair does have its utilities, and people would surely buy it if McDonald’s somehow decided to mass produce them. Sure, things such as the dip holders are way past the point of a chair (something normally used next to another piece of furniture called “table”), but it does have its advantages here and there. And people love to brag about having that kind of thing, so why not let them have some fun? It’s free money for them anyways.