Flying through flames takes a lot of courage 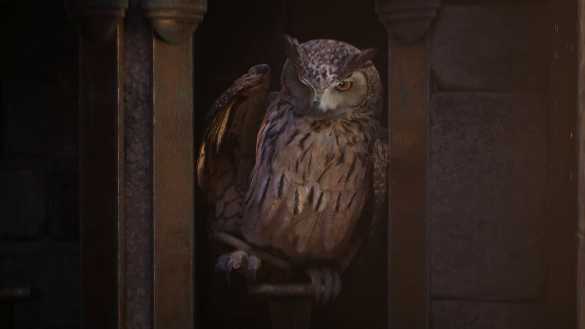 Earlier today, the official Hogwarts Legacy YouTube channel released a new cinematic trailer that helps confirm various spells in the game, show off the environment and see some of the enemies we’ll encounter. These different situations range from aerial views of the Hogwarts School of Wizardry to diving deep into dark forests filled with spiders. The main feature, though? It’s all displayed from the point-of-view of a courageous owl.

The cinematic trailer opens up with our brave owl flying out of the Owlery, letter on foot, as it soars through the Hogwarts school grounds. Diving into the school allows us to see Nearly Headless Nick and various students enjoying their school lives while professor Weasley divulges information about some ongoings in the world. However, this is cut short by the real highlight of the trailer.

Related: What Are the Differences Between the Four Common Rooms in Hogwarts Legacy? – Answered

The second portion of the trailer features some cinematic shots of students battling spiders in the Forgotten Forest and some other peculiar encounters. Immediately after the owl flies overhead, we see masked individuals who, without hesitation, cast Avada Kedavra toward the owl. While it does survive the encounter, it leads right into a clip of the owl flying through dragon flames.

Fortunately, the letter is successfully delivered, with no scratches on perhaps the most courageous owl to exist. The letter arrives in the hands of who we can assume is a character that represents the player, wrapping up the trailer. With these details, we can understand the enemies we’ll face and some of the spells – including an Unforgivable Curse – we can use along the way.