Where to Get Kalpalata Lotus in Genshin Impact - Prima Games
Tips

Where to Get Kalpalata Lotus in Genshin Impact 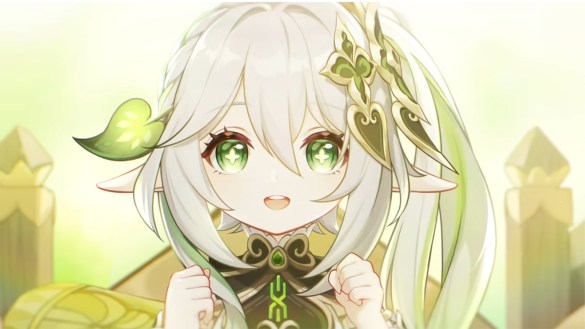 The introduction of Sumeru in the Genshin Impact 3.0 version brought a lot of new elements to the game – quite literally as it introduced Dendro. The 7th element was finally made playable alongside many new characters, weapons, and ascension materials. Kalpalata Lotus was one of those, being found exclusively in the region.

Characters such as Dori and the Dendro Archon Nahida require it for ascending, and those flowers can be somewhat tricky to find. If you’ve been wondering how you could get more of them to level those cute girls, continue reading to see where you can find Kapalata Lotus in Genshin Impact.

Where to Find Kalpalata Lotus in Genshin Impact

Kalpalata Lotus is a Local Specialty from Sumeru which grows exclusively on cliff sides. First of all, you’ll need to be able to travel to the region, which requires you to reach Adventure Rank 35 and complete Chapter II: Act IV – Requiem of the Echoing Depths beforehand.

If you ever had to farm for Violetgrass in Liyue, you may know the climbing terror that awaits you. The good news is that Sumeru makes exploration a lot easier with grappling hooks and Stamina-restoring flowers during bigger climbs, so don’t worry about it.

You can also make your life easier by using characters with good exploration skills, such as Venti, Kazuha, or even Keqing. Tighnari’s also a godsend since he reveals the location of nearby specialties in the minimap. Pay-to-win game? Maybe.

The first region you can hunt for them is the Mawtiyima Forest. Go for the teleport at the upper left area and start climbing to get that lonely Lotus.

After that, use the Electro Regisvine teleport to get the pairs of Lotuses at the right side of the area. They are all around the same height, so don’t climb that much.

Take a look at the map above for the exact location of the Kalpalata Lotus in this area.

Your next target is the Statue of the Seven in Gandharva Village. Immediately after reaching the statue, glide down directly to your left to find some of the flowers.

For the lone Lotus at the upper cliff, take the teleport for the nearby Domain. You’ll find two Eremites examining some scattered leaves on the ground. Defeat them and use Anemo on the leaves to find the Lotus.

Use the image above as a reference to find those Kalpalata Lotus.

Related: How to Find Redcrests in Genshin Impact

Starting with the village, take the upper teleport next to it and turn right, gliding down the cliff after you found a river. You can find plenty of Kalpalata Lotus lying around here.

Next, go for the surface teleport in Devantaka Mountain next to Port Ormos. You can find some pairs of them on both sides. Just don’t startle the nearby Tigers and you should be fine.

Use the map above to see the exact locations of the Kalpalata Lotus here.

The Statue of the Seven is the nearest teleport for this one. Go left until you reach a cliff near the Waverider Waypoint. You’ll see the flowers right above the Seelie Court.

For the other ones, go for the cliff teleport next to the Waverider Waypoints in Yasna Monument and move straight forward to find them lying on the cliffs. Next, move to the teleport at the right of the previous one and keep gliding to the right until you spot some of the Lotus hanging on cliffs near the waterfall.

Use the image above as a reference to find those Kalpalata Lotus.

There’s a bunch of them here, but let’s start with the leftmost ones. Take the Statue of the Seven and go left until you find it near some enemies you’ll probably also have to fend off.

Head to the lone southwest teleport located on a cliff and head northeast until you can see two waterfalls. The Lotuses are right beside the higher one. Continue to the right until you reach some smaller cliffs near some Fungi in which you’ll find some of the flowers.

Now go for the lake teleport left to the Statue of the Seven and turn around to find a few of them. Lastly, go for the Statue and take the northeast way until you reach yet another waterfall. Check both sides to be rewarded with the last few Kalpalata Lotuses.

The complete route will net you a good amount of these flowers, but not enough to get a character all the way up to Level 90. You’ll need to wait a few days for their respawn or just ask a friend to catch them in their world.

In the meantime, you can also check for other resources in the official Genshin Impact interactive map.

Genshin Impact is available on PlayStation 4, PlayStation 5, PC, Android and iOS devices through the official site. You may also be interested in where you can find Scarabs or even the similarly-named Nilotpala Lotus. For more Teyvat content, you can click on the Genshin Impact tag for a complete list of our articles related to the game.