Where to Get All Bell Peppers in Pokémon Scarlet and Violet

Fun fact: bell peppers are the worst vegetable and it should be illegal to force your Pokemon to eat it. 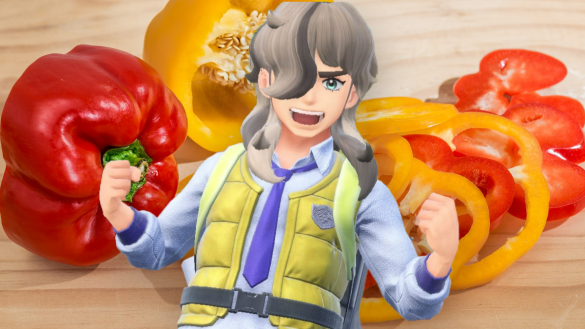 Here are some cold hard facts about Pokemon Violet and Scarlet. If you want to be the very best trainer you can be, you’re going to need to craft some excellent sandwiches. And a big part of that is bell peppers. These simple, colorful vegetables feature prominently in more than 20 sandwiches, but they might elude you if you haven’t made it that far into the game. Here’s where to find all bell peppers in Pokemon Violet and Scarlet.

Where to Get All Bell Peppers in Pokémon Scarlet and Violet

There are a grand total of three different types of bell peppers: red, yellow, and green. But not all peppers are the same for sandwich crafting. Personally, I can’t tell the difference, but the game can.

If you want to find all three, the process to do so is simple. You’ll need to acquire three Gym Badges. Once you’ve trounced three of hotshot trainers, head to either Mesagoza, Artazon, Cortondo, Levincia, Cascarrafa, Porto Marinada, Medali or Montenevera.

Related: How to Get Sparkling Meal Power Level 3 in Pokemon Scarlet and Violet

Once there, you’ll be making a beeline to one of Paldea’s most prominent franchises: Deli Cioso. This deli specializes in sandwich materials, from Hamburgers to Watercress. But for our purposes it has already pre-sliced Bell Pepper. And for some reason, Green Bell Pepper costs less than the others.

Since Bell Peppers feature so prominently in sandwich crafting, it’s a good idea to stock up on these little slices of crunchy bitterness. Your wallet might not thank you but that’s a small price to pay for convenience.

After that, bring them to your favorite picnic spot and then make some sandwiches that are now slightly worse, taste-wise, because there’s bell pepper in them. I suppose they do offer one thing, though. They’re a necessary ingredient if you want to get Sparkling Meal Power Level 3.