When Does Lotus Join Competitive in Valorant? – Answered

Here's when Valorant's latest map will bloom in competitive. 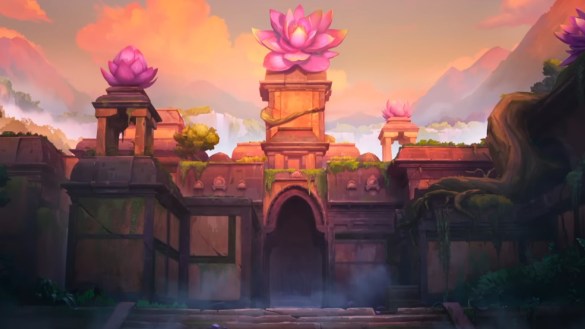 Valorant just debuted the first act of its sixth episode of content, bringing with it the usual heap of content. A brand new battle pass gives 50 levels of rewards, a new skin bundle hits the shop, and most excitingly, a new map has made its way onto the showfloor, helping replace Bind and Breeze in the map pool. With a new map though, you may be wondering when it’ll be playable in competitive. Here’s when Lotus will join competitive in Valorant.

As of the release of patch 6.0, Lotus is only available in two modes. It’s available in Swiftplay, Valorant’s shorter version of Unranked/Competitive, alongside a playlist that’s exclusively Lotus aptly titled Lotus Queue. Riot Games is planning to bring Lotus into Unrated and Competitive Play with patch 6.1, which is scheduled to launch the week of Tuesday, January 24. You can bet with it will come some small changes as well, possibly to the map but more akin to other small game patches.

While this means you’ll be waiting a while to try Lotus competitively, it’s better this way. If maps were to join competitive on day one, it would be chaos as players wouldn’t know what any callouts on the map are. With this in place, everyone playing competitive after patch 6.1 should have some small idea of where everything is on the map. There’ll still be people first-timing the map in competitive, mind you, but the cases it happens will be significantly less.

For now, there are plenty of other changes to test out. Split just came back into the game with a ton of changes, hopefully making the map a little less annoying to play on. We’ll need to wait to know for sure, though.