Overwatch 2: How to Complete the “Knock, Knock...” Wrath of the Bride Challenge - Prima Games
Tips

Overwatch 2: How to Complete the “Knock, Knock…” Wrath of the Bride Challenge 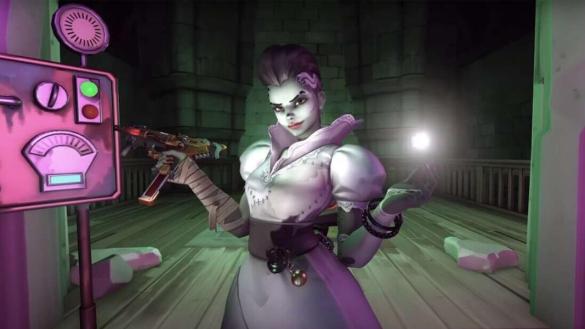 Challenges are a neat way to get some extra Battle Pass experience in Overwatch 2, and Blizzard made the Halloween Terror 2022 event more fun by adding some exclusive, limited-time ones. They’re not all easy to get, though – in fact, you’ve probably noticed they’re described in riddles of sorts rather than telling you what to do outright.

“Disturb the Guest in the Tavern” Overwatch 2 Halloween Terror Challenge

This is one of the easiest ones to knock off your list – the hard part is knowing what you’re supposed to do. But luckily we’ve done the legwork for you, and it was annoying. We spent ages shooting all the items in the Tavern trying to make enough noise to “disturb the guest” only to find out we were doing the wrong thing the entire time. Love it.

To complete the “Knock, Knock…” Challenge, you need to progress slightly until you and your team enter the Tavern in the beginning. Once you’re in there, go up the stairs on the left, walk around the landing, and you’ll see two closed doors. Go up to the one on the right and you’ll be prompted to “Knock.”

Bang on the door four times to annoy the sleeping guest and complete the Challenge (you can also melee the door twice apparently, but we haven’t tried). You’ll also unlock Kiriko’s “Scry Some More” voice line for doing so – neat.

If you’ve still got more Overwatch 2 Junkenstein’s Revenge: Wrath of the Bride Challenges to finish off, check out our other guides: