I recommend making a sandwich while getting this one 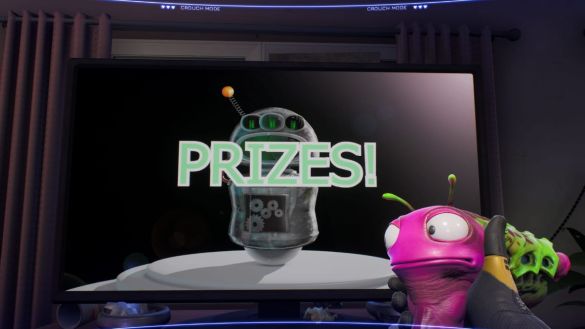 High On Life is a comedy sci-fi shooter that is rife with Easter Eggs, Z-rated movies, and dozens of animated shorts. It’s the latter that carries a lot of charm and world building, bringing with it shades of humor that will appeal to almost anyone’s funny bone.

Except one – The Annoying Countdown Show. This terrible, terrible ad has one purpose: to trigger rage in the viewer from sheer annoyance. And yet, if you want to get the Epic Legendary Prize achievement you’ll have to watch the entire thing. And while that’s a monumental task in its own right, it’s not the hardest part about this achievement.

The hardest part about obtaining the Epic Legendary Prize achievement is actually finding it. You’ll technically be able to get this achievement early on, once Gene moves into your house and starts watching TV. But you’ll likely notice that Gene spends a lot of time watching movies. But progress far enough in the game and you’ll move past the three movies you can watch in your own home.

Related: All Full-Length Movies in High On Life – Listed

With the movies done, Gene will start watching ads. There are around two dozen potential ads that might be on TV, but the one we need, The Annoying Countdown Show, is particularly rare. It’s so rare, in fact, it’d be a fool’s errand to wait for it to crop up naturally, as you’re going in and out of the house, tending to do whatever it is Bounty Hunters tend to (killing probably?).

Instead, the next time you enter your house through a portal, abuse the checkpoint that was created on your arrival. Stand in front of the television and, if it’s not playing the ad you want, restart your checkpoint. You won’t lose any progress and the television will change channels.

Keep switching channels until you see the cheap R-2 knockoff on your screen.

While I grinded through checkpoints for this achievement, I noticed that my first checkpoint restart always led to a black screen. But the next restart would cause the channel to change. So, it will take two restarts to get a new channel. Now, get ready to do that a lot. It took me over 120 restarts to actually get the channel, though it’s likely you’ll have better luck than I did.

Once you find the channel, you’ll have to wait through approximately five minutes of the robot counting down to the “prize”. But the real prize is unlocking an achievement with 45 gamerscore tied to it.