How to Get the Swordseeker Achievement in Genshin Impact

The Unseen Razor is unseen no more 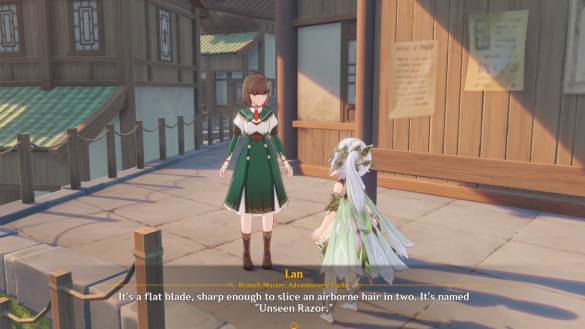 Daily Commissions often tell some small self-contained stories that we follow as we complete them in Genshin Impact. Some might end in the same quest they started while others will take a few more days and quests (as well as some help from lady luck) to see their whole picture. A well-known story is about the Adventurer Lan and her unending search for her brother’s long-lost sword, the Unseen Razor.

The weapon remained unseen for years as the sword we find at the top of the Guyun Stone Forest cliff is just another generic 3-star Claymore. It turns out that Version 3.3 actually brought a conclusion to this tale as we can finally grasp its whereabouts, and the Swordseeker achievement is proof that you’ve finally done it. Here’s what you’ll need to do to get it.

How to Obtain the Swordseeker Secret Achievement

First, you need to set your Daily Commissions to Liyue-only if you’re chasing this Achievement or many others that also involve Liyue’s commissions such as Storytelling Method or playing pirates with the kids at the Harbor. You can do this by going into the Adventurer Handbook’s “Commissions” tab at the upper corner.

If you’re following the story, you’ve noticed that each time we get the “Where is the Unseen Razor?” Commission, Lan sends us into a new direction where you either raid a Hilichurl’s camp or fend off a Ruin Hunter stalking you. Completing either of these now triggers a new version of the quest.

If the Commission appeared to you, pay attention if Lan mentions something about the sword being destroyed by monsters. If she does, you’re a lucky person! She’ll send you into a new location where, after defeating every monster in it, you’ll find a sword hilt that originally belonged to the Unseen Razor.

Now you’ll need to continue completing commissions in Liyue until you get “Where is the Unseen Razor?” again. If Lan mentions the part you’ve found previously, this is your final step. She will ask for your help in dealing with monsters once again and, as a final reward, you finally get the Swordseeker achievement.

It may take a while to get the correct quests, but your best bet is to keep your commissions in Liyue as long as possible. This is also a great chance to get the other achievement-related new commissions introduced recently, so it will definitely be worth it if you like to chase them.