How to Get Gyrfalcon’s Hauberk in Destiny 2 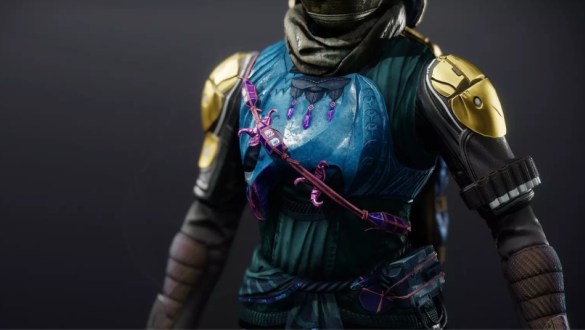 If you’ve played any Crucible or wandered into a Destiny 2 subreddit (you poor fool), you’ve likely felt the invisible wrath of a Hunter or heard people moan about them. Invisibility has risen to prominence because it reduces the amount of time you appear on an enemy radar and because it allows you to catch your opponent unaware. An extremely useful ability when you’re farming kills to impress Shaxx.

The Exotic chest piece, Gyrfalcon’s Hauberk, offers the intrinsic perk See Me, Feel Me. This perk allows your Void weapons to gain volatile rounds after you emerge from being invisible. When you are invisible and defeat a combatant while using a finisher, all your weapons gain bonus damage; you and your nearby allies gain a reserve overshield and improved class ability regeneration. These reserve overshields can be deployed by using a class ability.

Sounds extremely powerful, right? That’s because it is. But getting your hands on this Exotic chest piece exclusive to Hunters isn’t easy. Here’s how you can do it.

How to Get Gyrfalcon’s Hauberk in Destiny 2

As with many of the new Exotic armor pieces, Gyrfalcon’s Hauberk can’t be found through random enemy drops. You’ll have to head over to Legendary Lost Sector of the day. These Lost Sectors are marked on the World map with a blue icon. Hover over them, and you can see precisely what the Legend Difficult entails and what buffs (and debuffs) you can expect if you decide to take on the challenge.

But more important than the buffs is that it will also show you what possible rewards you can get. Not all Legend Lost Sectors offer the same armor. You’ll have to wait for a day when the Legend Lost Sector reward is an Exotic Chest Armor.

Related: How to Complete Should You Choose to Accept It, Part II in Destiny 2

Clearing the Lost Sector on Legend difficulty doesn’t mean you’re guaranteed to get Gyrfalcon’s Hauberk, either. It’s more likely you’ll get an Enhancement Core. Worse than all of that, even if you do get an Exotic chest piece, there’s a chance it will be another Exotic chest piece you don’t have. Imagine getting the Lucky Raspberry instead…

Unfortunately, grinding out these Lost Sectors is the only way to get Gyrfalcon’s Hauberk for now. So, good luck Guardian!