How to Get All MVS Halloween Skins - Prima Games
Tips

How to Get All MVS Halloween Skins 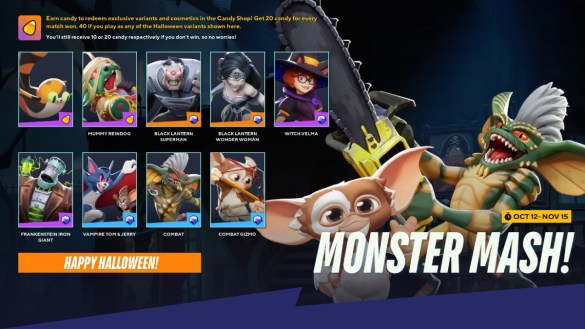 The MultiVersus Halloween event is underway. It’s either called “Monster Mash” or that’s just fun words pasted on that infographic. Either way, not only has Stripe joined the roster, there are a bunch of awesome, new Halloween-themed Variant skins for several characters. You can even earn some of them just by participating in the event! Unfortunately, you have to shell out real-life dollarydoos for the rest of them. They’re neat though, if you’re the kind of person with Skin Money. There’s probably a better phrase for that but time waits for no man or backspace key. Onwards!

All MultiVersus Halloween Skins Listed (and How to Get Them)

For this slobbery abomination, you need to collect 3,000 pieces of Candy. That sounds like a lot, but just wait until you see the next number.

Jake the Dog’s alter ego once again shows up for MultiVersus in Variant form. This time we have a calico pattern, which I guess counts as Halloween-themed despite just being normal cat colors. Somehow this justifies a massive 12,000 Candy price tag, and I don’t want to even think about figuring out how long that’ll take.

There won’t be a paragraph for each of these ones, sorry! But this is an appropriate time to go over the Gleamium exchange rate. The minimum Gleamium purchase is 450 for $4.99 USD, and the biggest is 6,000 for $49.99 USD. So that’s around 100 Gleamium per dollar. Of course the math we’re looking at here means the game does that annoying thing where you can’t just buy the thing you want outright, meaning if all you want is the Tom & Jerry skin you’ll be left with an extra 200 fake dollars you didn’t intend to do anything with in the first place.

The overall total if you get every skin is 5,800, so just under fifty smackers for the set. But you’ll be paying the fifty anyway. That leftover 200 won’t do much for you aside from a couple of things like taunts or banners, some of which cost exactly 200 Gleamium. That’s hard times, gamers.