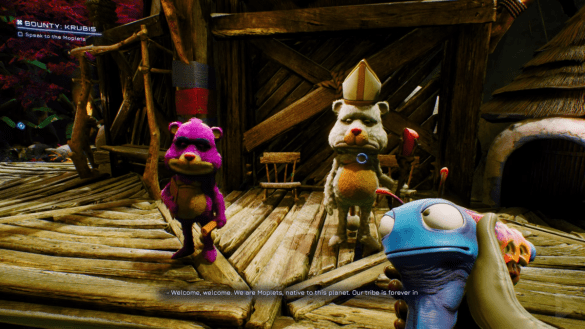 High On Life is an irreverent comedy sci-fi shooter that puts you, a teenage disappointment, into the role of a bounty hunter. You’re Earth’s last hope against an alien cartel called the G3, who’s determined to turn humans into drugs that can be smoked through Hyper Bongs. Fortunately, you have an arsenal of sentient guns on your side to make chilling the G3 bosses a little easier.

Zephyr Paradise is one of the earliest places you’ll travel to in your quest to save humanity. This beautiful planet is, unfortunately, the home of two enslaved races and Krubis, the G3 boss, who rules everything on the planet.

You’ll make your way to the Moplet town, which is being besieged by G3 grunts. Clear them out, and the village leader (Pope Moplet?) will instruct you to go to Ranchy, the alien who lives on the other side of the river. But how do you actually get across the river?

New enemies will warp near the village, and you can head back the way you came when you first entered Moplet village to see that a new structure will be mired in the sludge river. Sound cues are really useful here if you’re struggling to find them, as they’ll be bickering loudly.

Jump to this structure, fight the enemy, and you’ll see a stone ledge you can jump on top of beside the enemy structure. Climb on top of it.

Immediately in front of you (and slightly above you) you’ll see a pulsating green bud. Shoot it, and it will create a fan leaf/mushroom platform. These aren’t permanent, so don’t dawdle. Jump on top of the orange mushroom shelf, then use the hook bug to swing your way to the next stone ledge.

Use the two hook bugs to then reach Upper Falls.

And that’s it! If you find yourself having trouble, it’s okay, it’s all doable, and there’s no special trick. I definitely drowned in toxic sludge a few times. Just keep trying.