How to Complete the Riches to Rags Challenge in BitLife

From royalty to living on the streets 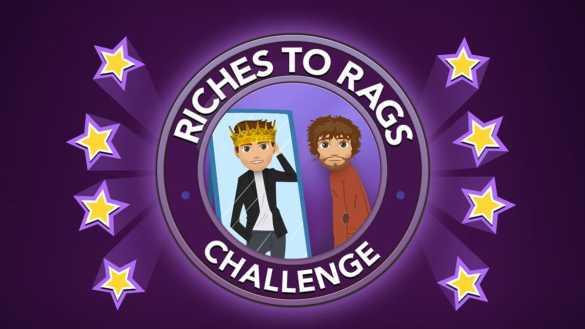 How to Complete the Riches to Rags Challenge in BitLife

Below are the five tasks you have to complete for the Riches to Rags Challenge in BitLife:

Before moving forward with this challenge, make sure you have the Street Hustler special career pack purchased! With this, you will be able to become a scam artist to finish the last two objectives. You can buy this individually or get Boss Mode to obtain every current and future pack.

Related: How to Become a Street Hustler in BitLife

Becoming King and Reigning for 15 Years

Once you buy the Street Hustler pack, it’s time to become royalty! The first thing you’ll want to do is create a male character in a European country. Your best bet is a region like the United Kingdom or countries like Belgium, Denmark, Sweden or the Netherlands. From here, you can either set your royal status using God Mode or continuously create characters until you’re born a prince. The best situation is that you’re the oldest sibling or an only child.

After you create your prince character, age up until you become a teenager. From here, you have a few options. You can either kill the current king or hire a hitman to ascend the throne. You can also wait until he passes from natural causes. Either way, at some point in time, you’ll want your character’s father and your siblings out of the picture so that you can become king and reign for 15 years.

Related: How to Be Exiled as Royalty in BitLife and get the Napoleon Achievement

Becoming Exiled and Making Money as a Scam Artist

Once you accomplish these two tasks, go into Royalty and conduct public disservices until you’re exiled from the country. To make this part even faster, you can execute people until the public is outraged. As your respect decreases, your chances of exile will increase. After your character is exiled, you can head into Occupation and become a Scam Artist through the Street Hustler pack. You’ll have to pick Scam Artist out of the four options, but from here, it’s entirely up to you which specific scam you want to commit to make some money. Using any means necessary, reach $500,000 total earnings to complete the Riches to Rags Challenge in BitLife!

BitLife is available on Android and iOS devices. If you’re interested in learning more about the game, check out How to Get and Crash a Yacht and How to Panhandle in BitLife.