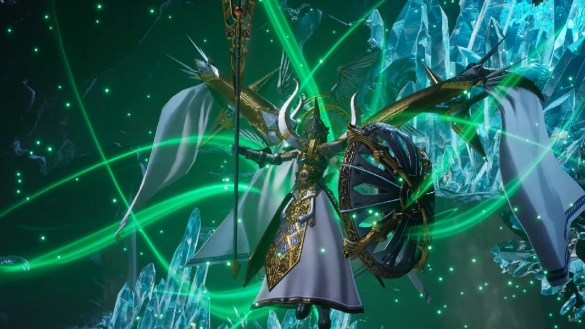 Minerva is the last alternate boss in the Crisis Core Final Fantasy VII Reunion, located in the final mission of the ninth category “Great Caven of Wonders”. To get to this mission list at all you first need to complete 18 Yuffie missions – missions 8-4-1 to 8-5-6, specifically completing mission 8-5-6 “Treasure Info 6” unlocks “Great Caven of Wonders” category where a lot of challenges await you before you reach the end of that list and the Minerva encounter in the 9-6-6 mission named “The Reigning Deity”. Once you are finally there, let’s find out how to beat Minerva, the strongest boss in the Crisis Core.

As in most other Final Fantasy games, overpowered secret bosses are the most significant challenge in the game, and fighting them always requires some serious preparation rather than any special tactics.

So let’s check out how to get ready for the Minerva battle first – here is the preparation checklist:

So, once you are all stacked up and pretty much OP, onward to battle.

And now for the actual boss fight, the tactics aren’t that complicated, just spam Costly Punch and use dodge/block when necessary, you’ll be mostly doing this throughout the fight. Minerva has two types of attacks, close range, and long-range, the trick is to predict them, but it won’t be that hard, the real priority is to stay alive, so always have a Phoenix Down on, and if you run out of them use Mug Materia to Steal some more from Minerva.

To avoid dying often, use those stocked-up X-Potions, or Curaga Materia, as often as possible. Minerva’s strongest attack is Judgment Arrow, which can change the course of the fight because if you are hit with it, you lose all buffs, your AP/MP will be annihilated and on top of that, it hits really hard. After this move heal quickly and use Phoenix Down immediately. Keep spamming Costly Punch and the goddess will eventually go down.

If this was too easy for you, switch the difficulty to Hard for a special surprise. Although Minerva was also present in the original PSP game in the Reunion edition, this formidable boss on the Hard difficulty level now has four times more HP! Minerva on the Hard difficulty level in Reunion has as much as 77,777,777 HP, which is a drastic increase compared to the 20,000,000 HP from the PSP version. so there is your new ultimate Crisis Core challenge!