How different is the new version of Zack's story? 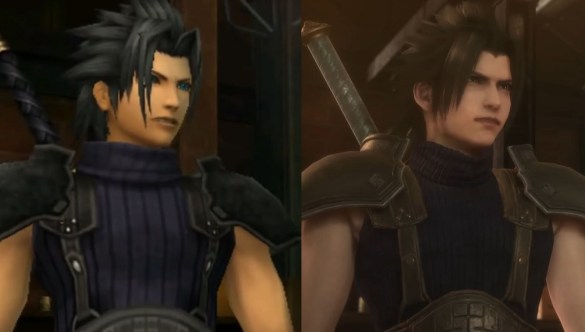 Ever since we saw Zack and all of those callbacks to the 2008’s Crisis Core in the few scenes near the end of 2020’s Final Fantasy VII Remake, there have been rumors about a potential remaster of this PSP-only prequel, whose story and characters could play a big role in the continuation of the Remake – Final Fantasy VII Rebirth.

Imagine trying to find a working PSP to piece together the Final Fantasy VII story. So yeah, it actually happened. Crisis Core Final Fantasy VII is finally back! This title has finally been released from its PSP tomb and is now available to all players on many last-gen and next-gen systems in a very well Remastered edition. But the question arises of the authenticity of this version, so let’s dig in and find out all of the most significant differences in Crisis Core: Final Fantasy VII Reunion.

Although this Reunion version may look like you remember the PSP game, your rose-tinted nostalgic memory will be shattered when you see any side-by-side comparison pictures or videos. Much work has been invested in this remaster, which is on the verge of being considered a remake. The character models are all new and now look closer to Final Fantasy VII Remake’s level of quality than the old PSP game. When changing the model, the aesthetics of some characters were slightly altered. For example, you can see Zack’s model in the picture below. Notice how he looks more like his Remake counterpart and less like an anime-styled character from Sims.

The only problem is that the FMV animations have remained the same as before, albeit upscaled. Still, like in the PlayStation 2 days, you will watch the characters change their appearance depending on whether it is animation or gameplay. But okay, this was a similar “problem” on the PSP, so we can’t fault this Remaster much because of it.

Apart from the refined real-time graphics of models and environments, the interface has also undergone many changes. While some of the main menus have remained identical, with, of course, better UI art now, many elements you see on the screen, such as those icons, for example, that indicate quests have now been changed to be more in line with Final Fantasy VII Remake’s HUD.

Digital Mind Wave system (what a certified Nomura name!) or DMW, which always presents slots like a mini-game system, won’t waste your time anymore because many of the events that it triggers can now be skipped. Boss fights now have slightly different mechanics, with the Ability Gauge appearing as a warning whenever the boss is about to perform one of its stronger attacks. What also makes the fights even more attractive are the brand-new summon animations that look amazing! Also, you can now store Limit Breaks for a better and more strategic flow of the battle, and on top of all that, even the camera is much better. So yeah, we can conclude that this Reunion edition tuned up the battle system of Crisis Core to be more enjoyable and fast-paced.

This part of the game has been changed the least, or at all. The story of Crisis Core is intact, and if you have completely forgotten it until now (I can’t blame you, I played it in 2008. and can’t remember anything like a typical JRPG character with amnesia), you will have the opportunity to remember the whole tangle with Zack, Angeal, Genesis and other characters that marked this prequel and that we will probably see in some fashion again in the sequel to Final Fantasy VII Remake.

And let’s not forget the arranged music and new voice acting, which is lately becoming a standard for more in-depth remasters from Square Enix, to what we can only say GOOD JOB! Now, it’s time to somehow manage all this Final Fantasy VII hype until the Rebirth comes, possibly sometime in late 2023.