Even Paimon could read those books 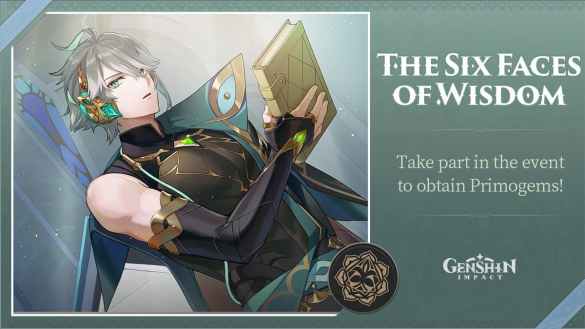 With less than a week remaining before the official release of Alhaitham in Genshin Impact, HoYoverse has started to market their newest pretty boy with full force. From official story trailers and skill showcases, they’re now adding another Web Event “The Six Faces of Wisdom” exclusively for him, which means a few more extra Primogems for wishing for him (or Xiao) in a few days.

You can take part in the event by clicking here.

This is yet another of those simple Web Events composed of a basic point-and-click action to learn more about the character and how they act in general with others around them. Don’t expect much from it either gameplay-wise or rewards-wise.

The premise is to find out which is the correspondent researching area for each of the books Alhaitham is currently organizing in the Akademiya’s library. The job’s not hard at all, as you have basically infinite chances and can even get a few hints if needed. The icons are your best friends here, so pay attention to them and you’re good.

After recalling every book to its intended section, you can get your prizes in the Reading List > Claim Rewards option in the left corner of the screen. You get a total of x40 Primogems, x3 Nagadus Emerald Fragment, x20000 Mora, and x2 Mystic Enhancement Ore for that. Nothing different from the usual Web Event freebies.

Although Alhaitham might not bring anything really new to the game, he’s not a character to be slept upon as he’s the first true limited 5-star Dendro DPS introduced to the game, and he’s expected to turn the newest element in the game to a next page instead of being solely regarded as a pure support tool. Tighnari already does that at the moment, but he’s usually more of a quick swap character instead of a fully on-field DPS. Alhaitham should shake things up.