It's all bangers down here 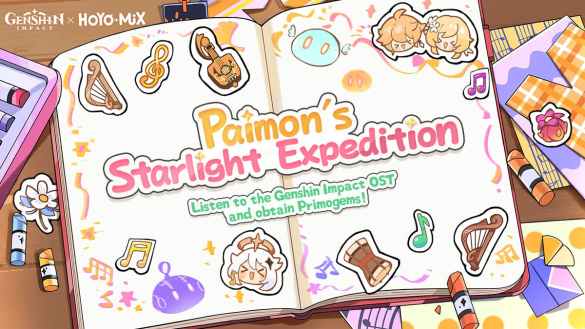 Alhaitham just had his skills fully revealed (although we already knew how they weren’t groundbreaking or anything), and as his banner approaches, we get more freebies to prepare for it in Genshin Impact. Some of these are in the new Paimon’s Starlight Expedition Web Event, a clever way for also promoting their music.

Click here to take part in the Web Event.

This special musical celebration lasts for a whole week, from January 11 to January 18. The rewards are the usual Primogems prize with a small twist: They are limited in amount, so grab your share while you can! Here’s what you need to do in this event:

How to Complete the Paimon’s Starlight Expedition Web Event

If you’ve been keeping track of new character trailers, this event will be a breeze for you. Click on the sound icon next to Paimon on the right page to start playing a small track sample. Your objective is to discover which character the track belongs to. You can make your guesses on the left page of the book and click on Submit Answer to see the results.

The characters will be fully randomized, and you must get at least five correct answers to get the Primos. You get more points for getting it right on your first try, but they seem to be completely arbitrary, and you won’t be locked out of the rewards if you don’t get a high score. But no one likes giving wrong answers only, so try your best to get them right!

Never watched any of the trailers? No worries. There are plenty of hints in the interface, with the most obvious one being the color of the character silhouette corresponding to its element. Elements and items related to the character are also included on the book’s pages.

In this case, we know the character is Geo because of the yellow color. That, alongside the Onikabuto and the Lavander Melon, points us to a single answer within the given options: Arataki Itto, the One and Oni! All characters will have a similar treatment. Yelan’s page will have her signature dice, for example. Just be careful not to confuse Hydro with Cryo, as their colors are very similar.

As you choose the wrong answers, more hints will drop, including a direct quote from said character and its silhouette being roughly drawn better.

After getting your five correct answers, you can share the event, and your points scored to get the final rewards of x40 Primogems. These will come in the form of a redeeming code, which you can use on the game’s official site on in the game through Settings > Account > Redeem Code. Now go listen to those themes; some of them are really sick.