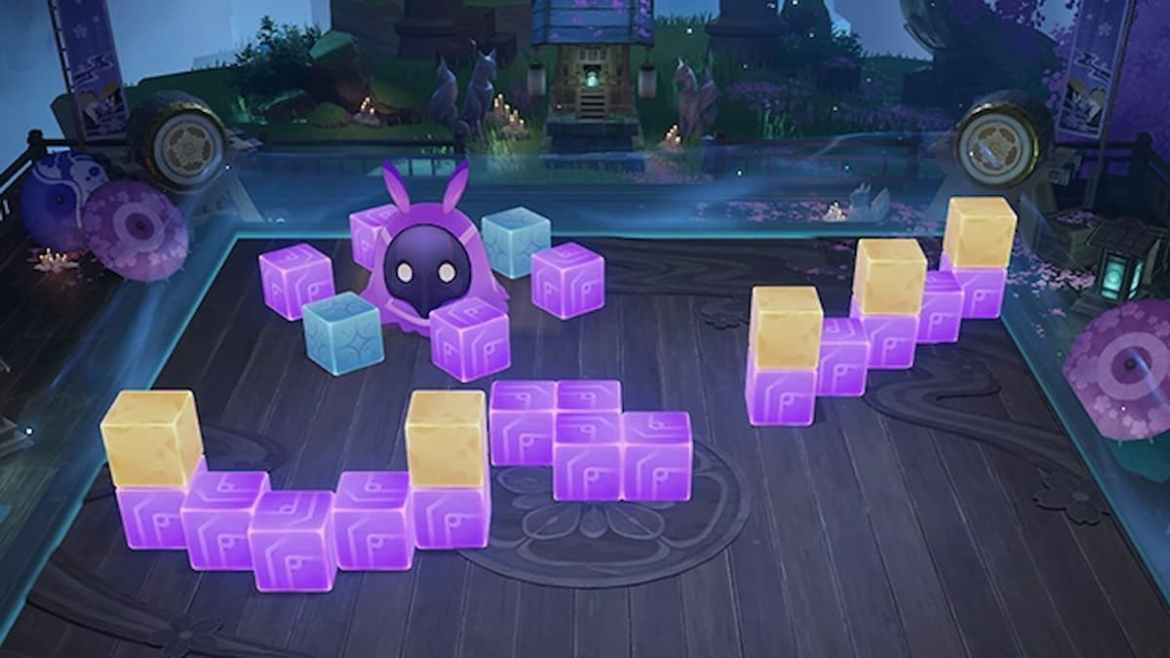 The Akitsu Kimodameshi event is very simple compared to previous big events, but it still manages to do its purpose of entertaining Genshin Impact players for a while. Part of this event is the Shatterdark minigame, which is a pumped-up version of the regular Leisurely Pastime Pong event. Instead of just breaking bricks for the sake of it, you’re now going for a big boss.

There are three different stages for this, each of them unlocked as the event progresses. You have no time limit, but your goal is to clear it as quickly as possible to get the maximum rewards. There are fewer restrictions as your biggest enemy is now time itself.

Everything works just as it does in Leisurely Pastime, except that now you’ll fight a monster boss in each stage. You still need to blow some space through bricks, but now you have to defeat it to win. The biggest change is that walking will rotate the position of the bricks surrounding the boss, so play that to your advantage.

Your biggest ally in this quest is Elemental Reactions, so here’s a quick table for them. The most beneficial ones are usually Pierce and Detonate, making Electro a very valuable element to have, so stick to it during the challenges!

The first enemy is an Electro Abyss Mage, so your best bet is to use primarily Cryo units to guarantee those consistent Pierce effects to hit the ball into him. Replicating Collider will help a lot if you can get some combos going early, and Pyro + Electro reactions can blow most of its defenses easily.

Pierce will also be a great boost if the ball is stuck behind it, so rotate around Pyro and Cryo units as you can. Avoid losing Reserve Balls and clear it around the 2 minutes mark to guarantee all prizes.

This Samurai has a persistent Pyro aura around it, which means it’s the perfect target for explosive reactions. Electro infusions will make quick work of the first protection walls, but the best way is to keep alternating between it and Hydro. Abusing it will trigger Relative Expansion almost permanently, which helps in keeping the balls in the game. And with so many bricks near the bounds, you’ll need that.

This one can and DEFINITELY will get chaotic soon. The Mirror Maiden will occasionally open her magic mirror portals behind her to randomly send the ball to another one, possibly with an even higher speed that will make you lose it and go out of bounds. But worry not as this will also help you a lot as the ball can get stuck between hitting her and going through mirrors. Changing between Pyro and Electro is the key here to clear your way to the boss and manage to score some direct hits. Whenever Concomitant Impact activates, shoot her down to quickly bring an end to this mayhem.