Genshin Impact: All Shrines of Depth in the Desert of Hadramaveth - Prima Games
Tips

Genshin Impact: All Shrines of Depth in the Desert of Hadramaveth

Finding ancient temples in the deserts is just another hobby 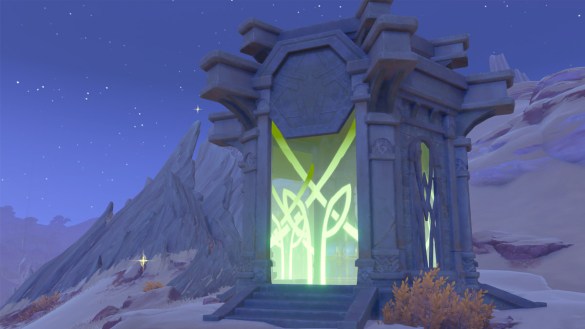 The Shrines of Depths are points of interest in Genshin Impact from which you can get a good amount of Primogems and many other rewards. Each region presents a few of these for you to discover, and they all require their specific Shrine of Depth Key to be opened.

The Desert of Hadramaveth has introduced a few more of those as extras for players to search for, and we got you with the best ways to get there quickly, as more rolling power is never enough.

All Shrines of Depth in the Desert of Hadramaveth Locations

This new area has brought three more shrines to open. They are all available from the get-go and require no extra quests to be done. You can find their locations below.

1 – The Sands of Three Canals

You’ll probably spot this one as you make your way to the Fane of Panjvahe domain as it stands out a little bit too much. There are grappling hooks conveniently placed nearby it, so don’t worry about having to climb too much. The Domain itself is also the best teleport to get to it.

Related: Where to Get Sand Grease Pupa in Genshin Impact

Teleport to the Wenut boss Waypoint and head east, then start climbing. The grappling hooks will show you you’re on the right path. The Shrine will be found amidst a few desert creatures waiting for you to open it.

This one is quite far from most teleports (unless you complete a few World Quests in this area), so your best option is to walk all the way from The Temples Forsaken until the cliff where you can find the final Shrine in this area.

If you’re low on Sumeru Shrine of the Depths Keys, you can get more of them by collecting Dendroculos and offering them for the Statue of the Seven. If you cannot get any more of them this way, the Vanarana Tree of Dreams also offers them as rewards on levels 8, 18, 28, and 38.