FIFA 23 TOTY Released: Who Are They? - Answered - Prima Games
Tips

FIFA 23 TOTY Released: Who Are They? – Answered

How Many of Your Votes Have Made the FIFA 23 Team of the Year Final 11? 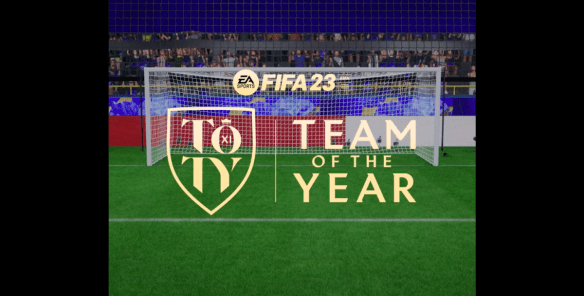 The FIFA 23 Team of the Year is out, and to say many were impressed would be a far stretch. The line that got most people cracking up after watching the announcement reel was: “as chosen by you”.

Why the hate? I’m still trying to figure out why, as FIFA fans chose the TOTY. They are probably just salty they got outvoted and their favorite player from last year never made the grade. Who knows? And honestly, the picks are top selections from 2022.

Related: Who Are EA Sports FIFA 23’s Team of the Year Nominees? – Answered

I couldn’t fault it; I believe this team could beat any team on the day. So without further ado, let’s get into the picks for the Best 11 of last year.

Here is your EA Sports FIFA 23 Team of the Year:

These were some of the best players in their respective leagues last year. Real Madrid, led by Benzema and Modric, had a fairytale Champions League run and capped off the double with their La Liga title.

While they were excellent, Eder Militao proved all his haters wrong, being one of the first names on the team sheets. Barely anybody feels the absence of Rafael Varane and Sergio Ramos with him and his new partner at the back.

De Bruyne was the Premier League’s Player of the Season in Manchester City’s title-winning campaign. His best in blue last year was undoubtedly one of the best individual performances by a midfielder in the EPL.

I could ramble on and on about each player, as each player was involved in their respective club’s success. Talking about success, of all the players on the list barring Bellingham, won silverware last season. Madrid players took the most prominent club crown with the UCL, while Messi took home the World Cup, football’s most significant award.

So should the Englishman be involved in the final team? He is one of the rising stars along with Hakimi, Mbappe and Hernandez. However, his inclusion is extraordinary, because he is the youngest player at 19 years old.

We sometimes forget how young he is, how mature his game has developed since leaving Birmingham, and how much everybody loves him.

How close was Prima Games’ Team of the Year Selection?

We got six votes in, picking a player in almost every position. A lot of bias and overlooking went into our picks. But by the looks of things, so were many other voters.

Check out Prima Games’ Best XI here: FIFA 23 Team of the Year Picks: Do You Agree With Our Best XI?

What Will the FIFA TOTY Players Get?

Each player in the best XI received a special gift from EA Sports and FIFA, which they presented to them at their club’s training grounds. Above is a video of the special treatment Jude got from his teammates and club — after all, he is the first player in the German club’s history to make the team. So it was one of the history books.

In FUT23, Each Player Should Receive the following:

For more from Prima Games, you can read: Is GOALS Another New Football Game? – Answered, What Are the Differences Between EA Sports FC and UFL? – Answered