Can Reshiram Be Shiny in Pokemon Go? – Answered

A white dragon with a few more shades of white 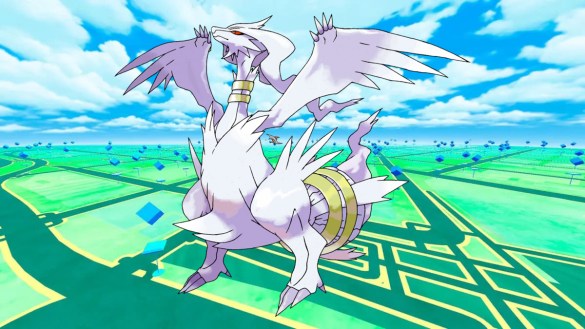 The iconic box art Legendary from Pokemon Black is back for challenging trainers in the 5-star Raids in Pokemon Go. Reshiram will be back from January 1st to January 10th, and he’ll also be featured in a special Raid Hour during the week. Players can have their shots at catching him during this period only if they can, alongside their fellow trainers, best this mighty dragon in battle.

This Reshiram comes with his signature move Fusion Flare as one of his attacks, alongside the enormous stats natural to legendaries. But alongside those perks, can you get lucky and find a Shiny Reshiram during those raids?

Can Reshiram Be Shiny in Pokemon Go?

Trainers will be glad to know that Reshiram can indeed be found as shiny in the raids. Differently from the Gen V games, where the story directly involved catching him and, therefore, he was shiny-locked outside of distribution events, Reshiram will have his alternate pallet colors available from the moment you find him.

Related: Can Cubchoo be Shiny in Pokemon Go? – Answered

Keep your eyes open for his sparks as he’s quite identical to his regular form. The most noticeable difference is that his rings get a shiny yellow color instead of making him a completely monochromatic white dragon. Yeah, that’s how they shinify most legendaries.

What Are the Odds of Finding Shiny Reshiram?

So you just need a little bit of luck to get your shiny Reshiram, which can be easily accomplished considering that he’ll be around for quite some time. The chances will be the same for any other legendaries you find in the future, assuming they have their shiny form unlocked in the game, so take note of that.